Legacy of Kain Wiki
Register
Don't have an account?
Sign In
Advertisement
in: Browse, Inhabitants, Inhabitants/Factions,
and 3 more
English

The Zephonim were a clan of vampires first encountered in Legacy of Kain: Soul Reaver and revisited at an earlier stage of evolutionary development in cancelled title Nosgoth. They were the descendants of the lieutenant Zephon.

The primary territory of the Zephonim is the Silenced Cathedral, and they are encountered exclusively in and around it.

As with all the clans seen in Legacy of Kain: Soul Reaver, the Zephonim were split into two distinct active types: the older, stronger and more evolved adult Zephonim, and the younger, weaker and less evolved fledgling Zephonim. They are also encountered in their inactive pupating state.[Soul Reaver manual (US)][Soul Reaver manual (UK)] In Nosgoth, a less devolved Deceiver variant was featured the available classes.

As a clan, they were exclusive to employ Vampire Worshippers around themselves as servants or guards. Zephonim (and their master) evolved to showcase arachnoid traits. They all had long thin spider-like limbs. Their most prominent aspect was their ability to climb walls. This made them well equipped to follow prey over vertical surfaces. However, the way they climbed was back to the wall with their limbs pointing backwards.

They were skinny, pale, with elongated heads and prominent teeth. They could use their claws to strike Raziel or bite him with their teeth. They could switch between bipedal and quadrupedal movement. They were the only clan to develop a third toe, most likely to assist them while climbing.

Zephonim exclusively inhabited the Silenced Cathedral, they were not seen outside or in other locations in Nosgoth. They also cocooned their prey and hanged them on the walls and ceilings. Some of these were used as a source of blood, other victims were transformed into the new Zephonim. This transformation seemed to have started with the widening of mouth or could be the outcome of mutilation caused by their captors.

The transforming humans webbed themselves onto the walls and would jump out as fledglings if Raziel disturbed them.

A Deceiver class Zephonim prior to devolution

Deceivers were a class of Zephonim encountered in the mid-events of Soul Reaver War for Nosgoth seen in Nosgoth.[NOS] They would briefly evolve into a deadly shape before the corruption of Kain's gift would send into the bestial state they possessed in Soul Reaver.

"the Deceivers revealed in their emerging powers and abilities, fully embracing the advantages bestowed upon them by their master Zephon. As time wore on, their insect influenced gifts evolved into physical ones. Beneath their skin a hard chitinous armour began to form, pushing out and slowly causing their flesh to peel away. Their bodies lengthened and any semblance of humanity began to give way to a more efficient killing form, one that reflected their instincts, their will, and their reflex actions. They embraced the changes to their form that their dark gifts wrought, binding their new skin under a tapestry of insectoid styled armour. Zephon's ability to hide his true face beneath an exoskeletal mask was seen as the height of evolution for the Decievers(sic): they chose to imitate their master with the split mask to reflect their duality between vampire and predatory insect. Soon their cocoons began to resemble spider nests, their homes that of a large hive, and their method of feeding a twisted abomination of arachnids. They would leave their victims alive for weeks hanging in prisons of web to be fed upon at leisure. Woe to any who stood against them, for death by their hands would not be quick or neat, but a slow lingering torture..."
―Daniel Cabuco

Background materials to Nosgoth noted that in the early-mid events of Soul Reaver "The Zephonim in particular, eager to compete in raw power with the elder Clans, attempted to artificially shape and force their metamorphoses through ritual self-torture, alchemical engineering and twisted breeding programs."[1]

Fledgling Zephonim were the descendants of the lieutenant Zephon. They had spikes on their forearms and exhibited six eyes. As all fledglings, they were weak to sunlight.

Adult Zephonim were the older, more evolved members of Zephon's clan. They had wing like appendages on their shoulders, a trait also present on their master, Zephon. They had a clan sigil on their chests and elongated arms with enlarged claws in comparison to the fledglings. As all adult vampires, they had red eyes.

Adult Zephonim on a wall 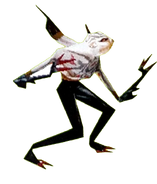