"These forges are tuned to the Soul Reaver’s energy. One you have baptized the sword in these elemental fonts, the blade may be imbued with that element at any future time."
―Elder God — Listen (file info)[src]

The Water Forge was a deleted elemental Reaver forge that was intended to feature in Legacy of Kain: Soul Reaver. Originally positioned within the Drowned Abbey, the forge was designed to imbue the Wraith Blade with elemental water and create the Water Reaver enhancement. Ultimately, both the forge and its accompanying enhancement were cut due to time constraints.

The Water Forge was an optional playable location that was intended to make an appearance in Legacy of Kain: Soul Reaver, and was one of many elemental Reaver forges that were supposed to make an appearance in the game. The forge was a special chamber associated with elemental water where Raziel would be able to imbue the Wraith Blade with water to forge the Water Reaver enhancement. Due to the time constraints, all of the other forges were cut and only the Fire forge remained in the final version - with both the Water Reaver and Water forge removed.[Soul Reaver][1][2][3][4]

The Water Forge was originally mentioned and featured in pre-release materials promoting Legacy of Kain: Soul Reaver. The presence of the forge in the game was discussed, with screenshots and even snippets of video showing the forge also making their way into pre-release materials - although they were not explicitly identified as such. In these a forge with running water dominated by a large funnel shaped vortex of water could be seen.[1][5][6][7][8][9]

Despite records of its presence the release version of Soul Reaver contained only one of the elemental forges that had been discussed - the Fire Forge - with the others cut before release. Although removed, the Water Reaver enhancement was present in the Debug menus of the retail game and could be activated through the menus or other means. The forge however was not present in any capacity in the retail or beta versions of the game and the location of the forge were not definitively known until many years later.[Soul Reaver][10][1]

In 2020 alpha versions of the game containing much of the previously cut content were publicised and these contained and definitively identified the lost Water Forge. In this version The Water Forge was found to be present located within the confines of the Drowned Abbey in the position that would later become home to the Fire Forge in later versions. The Fire forge in this version was instead located in Raziel's Clan Territory, meaning the Fire forge location was changed upon the removal of the cut content. From the beta versions onward the original position of the Water forge is instead taken by the Fire Forge and the Water Forge is removed from the game.[2][3][4][1][10]

As seen in previous images, the Water Forge had the same layout as the other forges with one prolonged corridor and forge at the end. Distinctively there was a large vortex of water dominating the room and pouring upwards out of a hole in the ground. By plunging the Reaver into this stream, Raziel would have obtained the Water Reaver - although the forge does not function correctly in the alpha and the colors of the Water Reaver are also incorrectly displayed. Raziel would have needed to reimbue the Reaver by plunging it into waterfalls, fountains and spouts found in the world, although this functionality is also missing from the alpha.[2][3][4][1]

Initially a generic explanation of all forges by the Elder God was intended to play when Raziel discovered his first forge, but upon deletion of the other forges this dialogue was tailored to be specific to the Fire Forge. The original voice recording is still present but unusued in the files of some builds.[Soul Reaver]

"These forges are tuned to the Soul Reaver’s energy. One you have baptized the sword in these elemental fonts, the blade may be imbued with that element at any future time."
―Elder God — Listen (file info)[src]

Like the Fire forge that would take its place, the water forge branches off from the lowest level of the 'church' structure within the Drowned Abbey and its entrance was initially blocked by a large stained glass decorated with a geometric pattern. The mural was breakable and could be shattered with a Reaver bolt or Telekinetic force projectile and behind it was a small antechamber with wave-like symbols on either side and a slanted staircase which led upto the forge proper.[Soul Reaver][Soul Reaver/10][Soul Reaver/11][Soul Reaver/Fire][2][3][4]

The forge itself was a long rectangular chamber with a curved end, adorned throughout with decorated pillars on both sides. Along the center of the chamber was a narrow channel filled with water which flowed to the back of the room; through the water patterned brickwork could be seen beneath. At the curved end of the room, the channel met with a large circular pedestal from where a vortex of water flowed up to the domed ceiling in an inverted pyramid shape. Behind the pedestal several small waterfalls could be seen around the curve of the room in the gaps between the pillars - each heading to refill the vortex. A set of large tiles covered the floor behind the pedestal and in the gaps between tiles running water could be seen flowing from the waterfalls toward the vortex.[2][3][4] 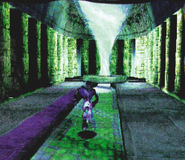 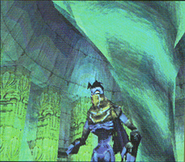