If a vampire's body is destroyed on the Material Plane and its soul is not consumed, a Vampire Wraith is born on the Spectral Plane. When a Vampire Wraith injures Raziel, it opens a wound from which it will continually draw off Raziel's energy. To halt the deadly drain, you must either slash the Vampire Wraith or flee.

These creatures grow in power the longer they dwell on the Spectral Plane. If for some reason its corpse on the Material Plane is healed, the Vampire Wraith will return to the Material Plane to reinhabit its body, bringing its deadly ability with it. These reincarnated vampires are recognizable by the sparks of blue energy they exude.

If a Vampire Wraith (or a Revived Vampire) lands a blow on Raziel, it's like opening a vein - they are then able to continually draw out and drain Raziel's spirit energy, even at a distance. Raziel must either close the distance and strike the Wraith to break contact, or must flee, putting a large enough distance between Raziel and the Wraith, that it can no longer maintain the connection.

Vampire Wraiths are present in the Soul Reaver alphas however they are used much more sparingly than in the retail or beta version of the game. They appear to only be able to attack from a flying swipe while sounds indicate their usual draining is active there is no leash effect and Raziel's health does not drain. Like the Sluagh and Raziel himself, the Vampire Wraiths have a colored halo representing their health level - the wraiths start at the blue level - a step above the Sluagh and a step below Raziel. 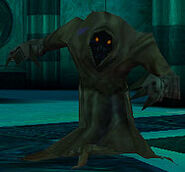