"My goal was within reach, all that remained was to open each and every sounding pipe"
―Raziel[src]
"All in time sirrah. Yes, time. Unless you master it - it will master you."
―Moebius[src]

Like many of those in the long-time Legacy of Kain fan community, I frequent Dark-Chronicle, Nosgothic Realm, The Lost Worldsand a few other devoted sites and I am a serial lurker on the major forums. Over the last few years I have made many changes and 'improvements' to this site and have collected a wealth of information related to the Legacy of Kain series. My goal is to completely overhaul this Wikia and fill out the many Wanted Pages, Stubs and Rewrites we have, until we have a page for every bit of significant information in the series and it meets the higher standards of the LOK community. I also intend on getting as many of the hardcore fans as possible to visit and help add to and maintain this site.

....and anyone wishing to hear Kain saying "you have a message" when they get a text go here ;-)

Info relevant to this wiki, featured in Prima guides, manuals and games.

For those without as Prima Guide; much of the SR2 Prima infomation can be found on SR2 Online

Playhouse (playing Avenging Angels and The Village of the Insane)

VMinor Businesses (some with multiple outlets):

Mental Simulacrum (guardian vanishes and multiple 'illusions' of the guardian appear, each illusion has only one hit point, if guardian is hit all 'illusions show same reaction and vanish)
Unnamed Projectile (Guide acknowledges these simply as 'projectiles' - similar to 'coloured spheres' used by Nupraptor in BO1.)

Sky Fury (guardian casts lightning from its fingertips, very fast attack but is slow to cast)
Tempest's Cloak (guardian imbues his (or allies) body with glowing forcefield which reflects attacks against Raz. 'enhanced' by time distortion attack (see below))

Time Distortion (alters flow of time. In order, time will speed up then slow back down to normal)
Time Singularity (basic projectile, 'enhanced' by time distortion attack (see above))

Turel Abilities: (blind but uses hearing in most attacks)

Claw Swipe (self explanatory)
Blind Charge (Turel charges at you, quick but inaccurate)
Homing Projectile (slow moving homing blue projectile, several can be present at once.)
TK Force (low level arching TK 'waves' that can be jumped over)
Echolocate/TK Acquire (Turel sends out a powerful sound wave which bounces around the objects in the room, allowing him to pinpoint the location of Raz before sending TK blast to hurl opponent across room - attack can be turned against Turel by striking the gongs)
Berserker Rage (Final dying attacks -wild thrashing and constant screaming - also turned against Turel by Raz) Possessed Janos Abilities:

Feral Humans (Male/Female) - Abilities: Charge and Leap (self explanatory), Bone Rain (Ferals throw a large bone into the air, which crashes down unpredictably)

more to be added

Aevum already has already created a map of Nosgoth itself here

NE House
Add an image to this gallery

SE House
Add an image to this gallery 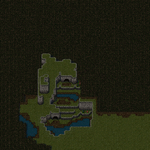 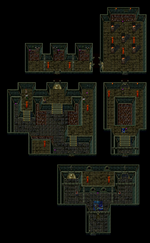 Warp from N Cave
Add an image to this gallery

Far W House
Add an image to this gallery