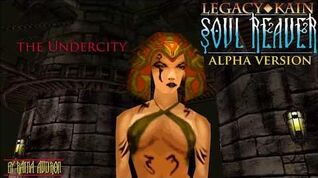 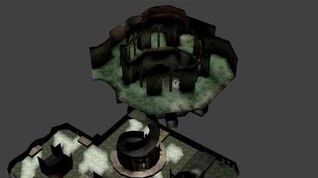 Legacy of Kain Soul Reaver Deleted Area - The Priestess and the Undercity - Complete Walkthrough
(by Legacy of Kain: The Lost Worlds - Official)

"Return to the human citadel, Raziel. The temple, despite its innocuous façade, is rotten to its core - and like a cancer, spreads its corruption throughout the City."
―The Elder God — Listen (file info)[src]

The Undercity is one of the deleted areas which were accessed originally from the Human Citadel. The City was a hunting ground for the Vampire Worshippers which abducted the citizens to serve as sacrifices. The Elder God warns Raziel of corruption spreading throughout the city as Raziel needs to obtain possession ability to get to the smokestack area.

The Undercity was originally accessed through City 9, which in the retail version houses a different corridor, leading into a larger room with two blocks and a dead Dumahim. By flooding the room, Raziel is able to stack the blocks and access an entirely different looking room labelled as Mrlock 7 (staircase) and Mrlock 8 (fountain room), housing a health upgrade in the end of the fountain room. However, these two areas were supposed to be in a different location altogether, possibly suggesting near other Mrlock rooms found in the released version. The pc version has leftover rooms City 10 and 11 which load separately and are revealed to be laying right next to City 9. By inserting City 10 and 11 into the corridor, it provides a perfect match. City 10 is a short corridor with a battered gate and leads to a large water reservoir chamber with a single pipe jutting out of a wall. This pipe would have presumably led to the Undercity.

The Undercity was a large set of rooms deep underground. The puzzles encountered were regarding flooding certain corridors/main bridge room in order to get to the top to fight the Priestess. Raziel would have to systematically pull levers to open floodgates as he progressed further up. Once at the top, he would have to encounter the Priestess at her temple to gain the possession ability.

The Undercity was present in the Soul Reaver alphas exposed in 2020. These revealed that the building on the edge of the 'city9' area was likely the Temple of the Worshippers and the base of the Priestess. The Undercity was accessed from City 9 which housed a tunnel leading into City 10, 11. City 11 was a large circular chamber with a pipe in the middle. By swimming into it, Raziel would enter City 12 and the pipe would eventually lead him down into the Undercity. Shift at Will was required for these sets of levels.

The main Undercity area was split into two loadable segments - Undercity 1 and Undercity 22. The bottom floor had a long canal running across which led to the first water raising puzzle and a warp gate. The timed puzzle required a block to be put underneath the floodgates after Raziel pressed the lever to hold the floodgate open - this raised the water level allowing Raziel to reach the next level of the area.

This would allow Raziel to reach the elevated bridges and access another drainage pipe, this time paired with a large room including another block puzzle. Block had to be pushed to the top of a roof and then frozen as Raziel pushed it off the balcony to create a stepping stone into a gated balcony room with another block to be required. Once pushed down, it would be used to secure a metal flood gate in place, further increasing the water level of the main chamber.

The final block was placed in a really tall chamber and Raziel needed the shift at will to climb up the tall temple-like structure. Once the drainage pipe was blocked by a metal gate, water would accumulate in the canal and completely flood the main chamber room and allow Raziel to access the top part of one of the three towers.

A spiral staircase inside the tower would lead to Priestess´s boss room, where she would stand above the arena, summoning vampires for Raziel to fight. There is an exit from this room but it is unclear where the corridor would have led to as the next connective room is missing - however maps reveal its exit matches up with the 'city9' temple building and a previously unknown tower on the outside of the building. Flooding the main chamber would also increase the water level in City 11, allowing Raziel to swim back and exit the Undercity that way as well.

The Undercity consisted of a central room with several bridges attached to the stone towers in the middle.