Turel's Clan Territory, also known as Turel's Lair, was the clan territory of Turel and his clan the Turelim, originally planned to appear as the penultimate playable locale in Legacy of Kain: Soul Reaver. The level was removed along with several elements of the original Soul Reaver storyline at some point in development, due to timing and budgetary issues.[1] 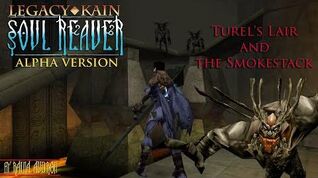 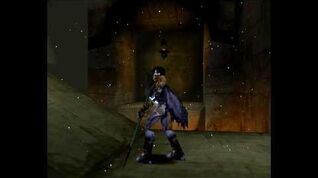 "Kain has withdrawn to his mountain retreat. Your only means of reaching him cut straight through the lair of your brother, Turel."
―The Elder God — Listen (file info)[src]

The Turelim clan territory was a level that was originally intended to appear in Legacy of Kain: Soul Reaver. Raziel was supposed to visit Turel's territory after gaining the Possess ability from the Priestess in the Undercity. Ultimately the levels after the Chronoplast - including the Undercity, Turel's Lair and Kain's Mountain Retreat ended up cut and the retail "to be continued" ending added in their place.

The Turelim territory was to have been the industrial heartland of Nosgoth, with many furnaces and what appear to be rivers of magma. The Territory also contained the Smokestack seen in the opening video to Legacy of Kain: Soul Reaver. After defeating Turel and gaining the Amplified Force Projectile, Raziel would have used an updraft from the top of the smokestack to glide to Kain's Mountain Retreat.[1]

Despite being cut from later builds, Turel's clan territory was found to be present in the northern wastes of Nosgoth in Soul Reaver alpha builds, positioned just up the canyon from the the Ruined City of the Dumahim. In later builds the entire area was removed and the Oracle's Cave moved into its position.

The territory itself revolved around the puzzle to get the Smokestack fans moving to create an updraft so Raziel could glide to Kain's Mountain Retreat. The first area of the retreat housed an impressive orrery structure overlooked by three glass windows - each containing further apparatus to control the mechanism - while the next room would be the main chamber of the smokestack with a lava floor and giant metal propeller in the middle. Through the area Raziel had to find three levers positioned on progressively higher fan blades to open all the metal doors surrounding the area: this would allow Raziel to return to the side chambers of the orrery where he could constrict dials and finally the orrery itself to activate the fans of the smokestack, activating the updraft intended to lead to Kain's Mountain Retreat.

"I know we moved one forge away from the Oracle’s cave after we cut down a lot of areas and repurposed things.
City and Citadel was supposed to have the majority of the possession puzzles, with a few scattered about. That said the area above Turel’s, I believe was a switch for releasing a constriction obelisk. Most other passageways were to cut environments of the game or shortcuts that couldn’t handle the streaming. We were literally running out of time to build corridors so things could stream"
―Daniel Cabuco[2]

In the background materials for multiplayer spin-off Nosgoth, the Turelim Clan territory was mentioned as the site chosen for construction of the first smokestacks and was something of an industrial heartland in Kain's empire in events of Soul Reaver Nosgoth.[NOS][3]

The territory eventually appeared in the game as part of the Crucible map area and contained a number of Turelim statues, industrial mechanisms, furnaces and chimneys, and prominently featured the main Smokestack nearby.[NOS][3]