Legacy of Kain Wiki
Register
Don't have an account?
Sign In
Advertisement
in: Blood Omen 2, Blood Omen, Browse,
and 9 more

Locations article
The Termogent Forest in Legacy of Kain: Defiance

"The black forest reigned here, its kingdom rarely invaded by those that live in the light. But it was called home by this mysterious Vorador. Legend told of a time when Vorador defeated Malek of the Sarafan.
If such a man did exist, then he could perhaps be the key to defeating the Ward."
―Kain — Listen (file info)[src]

The Termogent Forest, also known as the Black Forest, was a massive swamp filled forest in central Nosgoth that appeared in Blood Omen: Legacy of Kain and Legacy of Kain: Defiance. The marshland was filled with crumbling ruins holding many secrets, weapons and powers. At the forest's western edge lay the Lake of the Dead and notably the ancient vampire Vorador made his home within the swamp. Vorador's Mansion stood at the centre of the Termogent Forest, the path leading there marked by the Ignis Fatuus, skull shaped torches that glowed with green energy.

The Termogent Forest appeared in Blood Omen: Legacy of Kain where it was a playable location visited by Kain in the course of reaching Vorador's Mansion. A nearby area called the Swamp was visited by Raziel as a playable location in Soul Reaver 2 and the Termogent Forest area itself was briefly revisited in Legacy of Kain: Defiance, where it was seen in cutscenes as Raziel visited Vorador's Mansion.[Blood Omen][Blood Omen/6][Soul Reaver 2][Soul Reaver 2/3][Defiance][Defiance/8]

The Termogent Forest was first mentioned in Blood Omen: Legacy of Kain in the chapter Find the Oracle as Moebius - in the guise of the "Oracle of Nosgoth" - instructed the fledgling vampire Kain to follow the Ignis Fatuus to the forest in search of Vorador and a way to defeat Conflict Guardian Malek.[Blood Omen][Blood Omen/5]

After passing the Lake of the Dead and the Mist Form Dungeon, Kain was able to enter the Forest in the chapter Vorador's Mansion, where he found a vast forested swampland filled with many ruins, with several Ignis Fatuus - skull shaped lanterns - indicating a trail westward. Along the way Kain could explore some of the ruins, structures and caves in the area. Three 'dungeon' keeps - the Flame Sword Dungeon, the Control Mind Dungeon and the Blood Gout Dungeon could be found within and caverns led to Spirit forges for Anti-toxin artifacts and Energy bank artifacts as well as a Blood fountain for increased strength.[Blood Omen][Blood Omen/6]

Following the Ignis Fatuus westward, the path shrank to a single trail which spiraled around the western area of the forest inward to Vorador's Mansion at the center. Exploring the Mansion and meeting with Vorador, Kain was able to secure assistance from the elder vampire and left by a secret path which led him beyond the forest to a cave on the outskirts of Uschtenheim.[Blood Omen][Blood Omen/6]

When Raziel progressed from the Subterranean Ruins towards Uschtenheim in Soul Reaver 2 in the chapter Through the Swamp, he too passed through a heavily forested location bearing many of the hallmarks of the forest, but was never explicitly identified as such - only as "the swamp" - with its location suggesting that it bordered the Termogent Forest of Blood Omen. Raziel returned through the swamp all three time periods.[Soul Reaver 2][Soul Reaver 2/3][Soul Reaver 2/5][Soul Reaver 2/7][Soul Reaver 2/9]

Raziel returned to the the Termogent Forest proper in Legacy of Kain: Defiance, when advised by Ariel to seek Vorador in the "black forest" in Find the Location of Vorador's Mansion. Travelling on a lesser used trail from the Pillars through the Forest, Raziel arrived at Vorador's Mansion in the chapter Find Vorador and was able to find Vorador within. Departing for Avernus after Vorador's suggestion of seeking the Heart of Darkness, Raziel would return to the mansion in Battle Kain after recovering the heart by apparently killing Kain. Fighting Vampire hunters through the structure Raziel would revive Janos Audron and be teleported to the Vampire Citadel, leaving the forest behind. The forest itself was only seen briefly and not encountered as a playable location, with Vorador's Mansion fulfilling that role.[Defiance][Defiance/6][Defiance/8][Defiance/12]

"Strange that Vorador would choose a dwelling so perilous to him. The swamp could only offer a vampire hazard and pain."
―Kain — Listen (file info)[src] 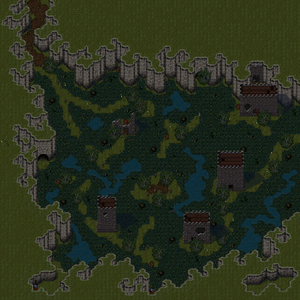 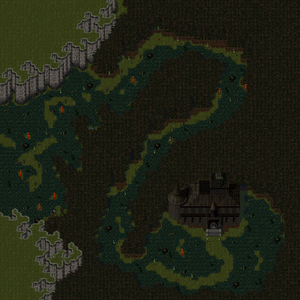 The general environment of the Termogent Forest in Blood Omen consisted of a forested marshland. The area was hemmed in by high cliffs and much it was covered in Water and swampy terrain with occasional patches of grass and many Trees. Skull-shaped lanterns known as Ignis Fatuus were liberally scattered through the area - roughly marking a trail through several dungeons to Vorador's Mansion - and in addition a number of artifacts could be found dotted around the swamp. Several building were positioned in the area in various states of decay and ruin with most apparently abandoned to the swamp - and perhaps suggesting a previous era where the area was more inhabitable. Various enemies could be found inside the buildings of the area, although few ventured out into the swamp which remained the grounds for Zombies and - in the east particularly - Liches and Shadows.[Blood Omen][Blood Omen/6]

The Termogent Forest could be broadly split into two map areas, west and east:

Very little of the forest area was seen in Defiance with only brief glimpses of a trail featuring Ignis Fatuus lanterns at the opening of Vorador's Mansion - with trees and other Termogent features visible over walls and through windows throughout the level.[Defiance][Defiance/8][Defiance/12]

In Blood Omen
For the Western Termogent Forest:

For the Eastern Termogent Forest:

In Defiance
For Vorador's Mansion:

"Vorador's keep was hidden deep within the Termogent Forest, nestled amongst vines and creepers that clung desperately to its dark weathered stone."
―Kain — Listen (file info)[src]

"His refuge lies in the heart of the black forest.
And may you molder there together until the end comes."
―Ariel[src]