Items article
The Stone Reaver in the retail Soul Reaver. 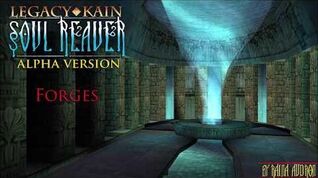 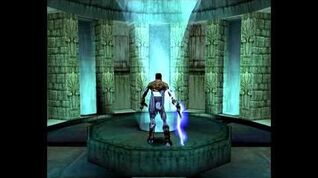 Legacy of Kain Soul Reaver - Deleted Forges, Reavers, and the Spirit Glyph
(by Legacy of Kain: The Lost Worlds - Official)
Add an image to this gallery

The Stone Reaver was a temporary enhancement for the Wraith Blade associated with stone. It was intended to be discovered by Raziel in the Stone Forge, but both the forge and Reaver enhancement were ultimately cut due to time constraints.[1][2]

The blade would have been a temporary enhancement, though when lost it could presumably be re-imbued from boulders or other stone objects. The blade was intended to be have several special abilities; petrifying enemies in a single strike and shattering them with a finishing move which also caused area damage.[1]

Despite being removed, a placeholder for the blade can be activated in game through the use of the debug menu - where it was misattributed as the Sunlight Reaver during reconstruction of the Debug menu. The blade is revealed as a bright white Wraith blade enhancement. None of the special abilities were present in-game[1][Soul Reaver].[3]

The Stone Reaver was present in the Soul Reaver alphas publicized in 2020 where it is a bright white blade with a subtle yellow tint. The forge for the blade was located in the Ruined City. The blade could shatter enemies with one strike or projectile.

Early attempts to activate deleted Reavers in developmental beta versions had attributed a yellow-orange Reaver as the Stone Reaver but these had been referring to an incorrectly assigned early Water Reaver.

A single blow stuns the affected enemy, effectively paralyzing/petrifying it for a period of time. A second blow destroys the enemy, shattering it on impact. An enemy struck only once will eventually recover, breaking free from its petrified state. Other adjacent enemies (within a small radius) are affected by the shock-wave of the second (destroying) blow. All enemies within proximity are automatically knocked into a stunned/damaged state.

The Stone Reaver projectile petrifies a single enemy, essentially an extended stunned state, during which the enemy is frozen (but will recover).
―Steve Starvis (Eidos)[4]

Retrieved from "https://legacyofkain.fandom.com/wiki/Stone_Reaver?oldid=191160"
Community content is available under CC-BY-SA unless otherwise noted.