The Spirit Glyph was a deleted Glyph spell that Raziel was intended to have gained in the original version of Soul Reaver . The Glyph and it's accompanying Wraith Blade enhancement, The Spirit Reaver, were cut due to timing and budgetary constraints.[1] 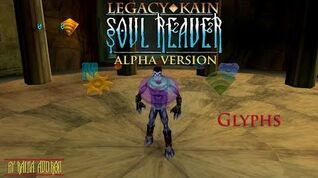 This glyph had the power to drain souls of nearby enemies and replenish Raziel´s own energy. The only known animation found in the alpha versions of Soul Reaver displays a wide green circle narrowing towards Raziel, killing any enemies within its range. Developer interviews describe the glyph spell as a "vortex of soul sucking energy". The Glyph symbol is shown in early Soul Reaver artwork as sharing the Soul Spiral of Raziel's health meter.[1]

In the Soul Reaver alphas the Spirit Glyph did make an appearance and is one of the more powerful glyphs. The Spirit Glyph altar was one of several rearrangement and repurposing exercises that took place between the alpha and later builds of the game. Originally found near Turel's clan territory in the northern frozen wastes, the altar was moved in later versions to the citadel (into the place occupied by the removal of the undercity) and was repurposed to hold a health upgrade - even its original location was changed with Turel's Clan territory replaced by the Oracle's Cave. Uniquely the Spirit Glyph requires the sacrifice of a nearby Melchahim to activate.

The Spirit Glyph´s location was originally accessed in the northern frozen valleys of Nosgoth, on the way to Turel´s territory, via a small cave tunnel. It leads to a tall room with a double sided staircase with a large vampiric mural in the middle. At the top of the stairs was a switch which opened a decorated gate. Upon entering, Raziel would be locked in and a Melchahim would spawn. This Melchahim had to be lured to the middle of the pedestal in the back which would potentially serve as a sacrifice and the Spirit Glyph would appear afterwards.

However, this tunnel has been blocked off in the retail version and only housed a bonfire. The morlock rooms 7 and 8 have been later moved to the City, replacing the old entrance to the Undercity when it was cut from the game (City 10 and 11).

The Spirit Glyph is represented on the Alpha Ring Menu by a spiral icon similar to Raziel's health coil icon and an even earlier version of this menu can be seen in video previews. Although the glyph itself was cut the icon for it had appeared in later materials as the official guide listed the symbol as one of the glyphs - misattributing it as the ”Stone Glyph warp gate symbol”. A later 'finalised' version of the symbol was created by artist Daniel Cabuco, consisting of a half spiralling pattern resembling the crest of a wave - however the glyph was cut before this was implemented. The design was shown by Daniel Cabuco in a stream in 2020.

After activating the Glyph Raziel extends his arms producing a green ring of contracting energy expanding energy which finishes in a green triangular vortex. Although it is intended to pull souls in while it does this the effect seems to be incomplete and ineffective in this version.

The glyph spell creates a localized vortex of soul-sucking energy, tearing the souls out of any enemies within a prescribed radius - the souls are magnetized directly into Raziel, replenishing his health energy.
―Steve Starvis (Eidos)[2]

The Spirit Glyph symbol matched Raziel´s own health coil symbol and the two rooms still make an appearance in the retail version where they serve as an area with a health upgrade.