The Spectral Realm exists alongside the Material Realm and is inhabited by many different species including: 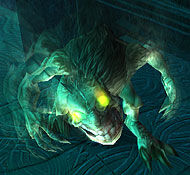 Raziel himself & his other incarnation(s) (the ravenous spirit(s) w/in the Soul Reaver or as the Wraith-blade) could be considered a combination between the Wraiths & the Sluagh. Raziel is blue like the Archons, feeds like Sluagh, and can reanimate in a corpse their material plane selves like a vampire wraith.

The Elder God in the Spectral Realm

The souls of all beings drift into this world after mere moments in the Material Realm. There they linger until they are claimed by the realms inhabitance, who in turn feed the Elder God(minus the Sluagh).

While the Elder God has been exposed for his lies and deceit, his role in spinning souls in the Wheel of Fate has not yet been disproven.

^ There has been alot of confusion as to what the nature of the Elder God is or where he came from. Another question is how he was able to exist in both realms simultaneously the Earth realm and the afterlife some including me are skeptical about the afterlife and if it's true that the Elder God does maintain life in the afterlife or possibly a pseudo afterlife created by the Elder God to stop any dead souls from passing on to the true afterworld, the purpose being to trap them in this purgatorial limbo in order for their souls to be hunted down by his ethereal agents to be captured to have their souls energy converted into sustenance to feed their "God" ^

Traveling between the planes is rarely an easy feat. Raziel acquires the ability naturally upon his death as a vampire and resurrection as a "Reaver of Souls". The Elder God grants him portals with which to cross over, and without them he is unable to move from the Spectral Plane to the Material Plane. He can, however, move in the reverse at will, or upon the destruction of his physical body.