Soul Reaver
The Sound Glyph altar was an optional location in Legacy of Kain: Soul Reaver. It was one of several glyph altars Raziel could access in Nosgoth in the Soul Reaver era.

The altar was located within the foundations of the Silenced Cathedral and contained a large central bell as well as a distinctive mural showing the use of a gong and accompanying gong stick. Activation of the altar allowed Raziel to gain the Sound Glyph.

The Sound Glyph like other glyphs in Legacy of Kain: Soul Reaver was an entirely optional enhancement and it was not necessary to visit the altar as part of the story of the game. The Sound Glyph altar was the one of a series of altars that could be reached from the middle of the game and could be accessed as soon as Raziel had gained the Telekinetic Force projectile ability from the Tomb Guardian.[Soul Reaver][Soul Reaver/9][Soul Reaver/Sound]

The altar was found in the caves beneath the Silenced Cathedral which could be accessed from inside the Cathedral by jumping down the large hole in the first internal area with the large pipes to the fans below. Following the rocky passages led down through a series of caverns to a clearing with a high alcove covered by a breakable window which led through to a distinctive open area - the Sound Glyph altar.[Soul Reaver][Soul Reaver/Sound]

To obtain the glyph it was necessary for Raziel to find his way to the top of the room and recover the unique 'gong stick' torch weapon and throw the item across the top of the room before Shifting to the Spectral Realm to negotiate a series of pillar jumps. Returning to the Material Realm to smash through a distinctive stained glass of a man ringing a gong, Raziel could then carry the gong stick through to the altar area where a large bell was present. Ringing the bell with the gong stick would cause the bell to raise up and unleash a soundwave which shattered the supports and pillars in the room. This in turn dropped the bell to the floor, cracking it and spawning the Sound Glyph.[Soul Reaver][Soul Reaver/Sound]

The Sound Glyph shrine could be reached from the first open area inside the Silenced Cathedral with the large pipes. By jumping down into the pit with the fans Raziel could reach a passage leading down into a cavernous area beneath the Cathedral. The passages were marked by rocky walls and outcrops and the passage opened up slightly and slowly curved to the right before narrowing into a passage heading northwest. At the end the passage met with another in a 'V' shape with a shallow pit beneath some stalactites. At the back a climbing wall was positioned leading up to a distinctive stained glass window with a circular 'target' design, which Raziel could smash with Telekinetic force projectiles to enter the shrine area. The second passage at the 'V' meanwhile led down a narrow passage southwest an then dropped down a steep incline to an open clearing. This room widened to the northwest before rising up a series of ledges to a small staircase which led out to a 'C' shaped corridor which emerged at the external village area of the cathedral.[Soul Reaver][Soul Reaver/7][Soul Reaver/Sound]

Behind the breakable window led into the sound shrine area. An initial corridor with pillared walls and green hues led northward before bending to the right and terminating at grate. Beyond this was the largest room of the shrine and the main chamber of the puzzle: a large open chamber with three tall decorated columns with platforms atop them lining the centre of the room. The walls of the chamber, like those of the previous tunnel were lined with pillars and recesses and atop each recess section was a small alcove with a lamp inside. Above the entrance grate was a wall decorated with patterns and symbols which was dominated by a central three-wide climbable wall, and atop this was another small alcove with a lamp - this one marked with a purple sound symbol. At the opposite end of the chamber was a small alcove at ground level with a darker pattern illuminated by a lamp, which contained the gong stick item. Directly above this alcove was another purple sound icon on a plainer green wall and at the top of the wall was a distinctive breakable stained glass, illustrated with the image of a bald man with a ponytail using a long gong stick to strike a circular gong-like target. Planar portals were positioned at the far end, atop the first column and in the final corridor, while the Spectral Realm effects would cause the first and last columns to bend and shift position.[Soul Reaver][Soul Reaver/Sound]

Beyond the stained glass was another narrow corridor with pillared walls which led a short distance into the altar: a distinctive V-shaped room with ribbed walls, a domed ceiling and a number of supporting pillars dominated by a stepped altar leading up to a large bell.[Soul Reaver][Soul Reaver/Sound]

In order to obtain the Sound Glyph it was necessary for Raziel to use the gong stick to ring the bell. This was achieved by picking up the stick from the far end of the room and throwing it up to one of the platforms. Raziel could then climb the scaling wall above the entrance, shift to spectral and jump to the first column. Once there he could shift back to material, jump to the second and third columns and shoot out the stained glass using Telekinetic force projectiles. From there he could retrieve the stick and throw it up to the corridor before shifting into spectral to complete the final jump and use the planar portal in the corridor to shift back. Once again retrieving the gong stick he could then take it through to the altar and ring the bell. Once rung, a series of tremors would begin and the bell would raise with a plug-like device falling off the bottom of the bell and unleashing a series of sound shockwaves that would shatter the nearby pillars. The bell would then fall and crack manifesting the Sound Glyph.[Soul Reaver][Soul Reaver/Sound][Soul Reaver strategy guide (Prima)]

The Sound Glyph altar is present in the Legacy of Kain: Soul Reaver alpha versions but the altar is in a completely different place, being located off the passage between the Sanctuary of the Clans and the Tomb of the Sarafan rather than in the caves beneath the Silenced Cathedral. This in turn means that the entry passages to the altar are different with an initial U-shaped corridor giving way to another curve and an L-shaped corridor before leading into the main chamber of the area. In later builds these initial corridors are replaced with the wide pillared curve seen in retail. The passages beneath the Silenced Cathedral are still present in the alpha, but there is no breakable window or climbable wall at the apex of the passage - only a shallow pool is found with no bonuses associated.[1][2][3][4][Soul Reaver]

Much of the alpha altar area appears plainer than the retail or beta versions. The trademark green hue is present although many of the recognisable designs are missing: there is no climbing wall, no sound symbols, no lamps, the gong stick is an dull gray color and the gong stained glass is a simple transparent square design. Although much of the puzzle procedure appears to be the same as in retail, the gong stick can't actually be used to activate the altar - presumably for technical reasons. However an imbued Sound Reaver can activate the altar instead: In a similar manner the Fire Reaver can be used to activate the Fire Glyph Altar even into the retail version of the game. Once completed the broken bell can even be used to reimbue the Sound Reaver. The Sound Gylph altar is also one of the few altars in the alpha to have a completed icon appear when the altar is activated - this manifests an icon of the early sound symbol.[1][2][3][Soul Reaver]

By the time of the beta versions the Sound Glyph altar has been moved to its final place under the Silenced Cathedral, however the cavernous passages leading to the Sound glyph altar are populated with Vampire worshippers as opposed to the Zephonim seen in the retail version: indeed these versions have the lower levels are populated Humans rather than vampires and a number of Vampire hunters are found in the outer village area. Only upon entry to the main cathedral are the Zephonim encountered for the first time.[4][Soul Reaver]

The fans and passage in the pit

The cave passage in the pit

The stained glass entrance to the Sound Glyph altar

The view of the columns from below

The opposite climbing platform

The view across the top of the columns

The view in spectral with moved platforms

Shockwaves emanate from the bell

The original entrance to the shrine in the alphas 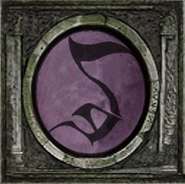 The Sound Glyph symbol on the walls 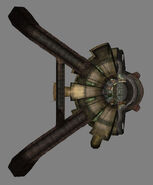 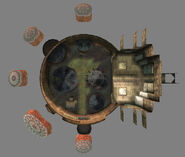 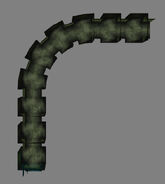 The discarded "Soundg1" from the alphas

The discarded "Soundg2" from the alphas