Legacy of Kain Wiki
Register
Don't have an account?
Sign In
Advertisement
in: Inhabitants, Inhabitants/Creatures, Defiance,
and 2 more
English

"Sluagh, the scavengers of the Underworld. Their feral hunger has claimed countless souls - spirits who now shall never find their rest."
―The Elder God[src]

Sluagh are the craven, feral scavengers of The Underworld, prowling the Spectral Realm like jackals in all eras and locales.[1] Encountered exclusively by Raziel, they are recurring enemies in Legacy of Kain: Soul Reaver, Soul Reaver 2 and Legacy of Kain: Defiance. Unlike other Spectral-native fauna, they are not allied or symbiotically connected to The Elder God, who considers them "vermin" worthy only of destruction.[2][3]

Unlike Vampire Wraith (and akin to Archons), Sluagh can devour souls to replenish their strength. According to The Elder God, such consumed spirits "shall never find their rest".[2] They "bleed" a greenish substance when harmed. When fully weakened by Raziel, they become transparent - capable of being devoured - and will universally attempt to flee. Either Raziel can consume the weakened Sluagh to restore his soul energy, or a fellow Sluagh will cannibalize it instead. Consuming a Sluagh is the only way to eliminate it; the Soul Reaver cannot fully destroy them. Other Spectral creatures are ambivalent to the Sluagh and do not attack them, instead focusing on Raziel.

In Legacy of Kain: Soul Reaver, the Sluagh are the weakest and least aggressive Spectral entities, with a tendency to flee from threats, and are easily defeated and consumed. However, when encountered in packs or desperately cornered, they will fight back with their claws. In this game, their health can be determined by a colored aura. A blue aura signifies maximum health, with green, yellow and orange distinguishing successive levels of weakness. Red auras denote extremely weak Sluagh.[1] Raziel first encounters Sluagh shortly after his awakening in The Underworld, condemning them as "scabrous wretches".[4]

In Soul Reaver 2, Sluagh are more inclined to attack Raziel than in the prequel, even when alone. Two variants exist in this game: cagey, evasive bipedal Sluagh, and the more powerful, quadrupedal Greater sluagh, noticeably larger and swifter than their counterparts.[5] In Legacy of Kain: Defiance, only the bipedal form of Sluagh exist, though appear more exaggerated and hunchbacked than their prior incarnations. In the The Underworld, Raziel is forced to destroy a horde of them before he can progress further. 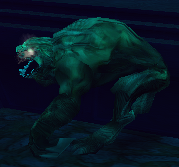 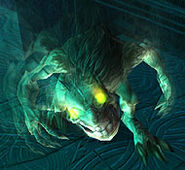 "When I made the Sluagh I looked at a number of sources. The description I got was a 'swollen rictus of teeth, unkempt hair and large, lamplike eyes.' I was aware of the Morlock design from the original 'Time Machine' but didn't reference it directly. I thought of it more as a reptilian monstosity with Janis Joplin hair. :P I think I got more influence from the Rankin Bass animated version of Gollum, and Slythe from Thundercats. Looking at them now I can see the connection, but I didn't use them as a reference. Strange coincidence. Maybe Amy had them in mind when she gave me the description. (aha! Another question to ask her next time we go for dinner)"
―Daniel Cabuco[6]