Legacy of Kain Wiki
Register
Don't have an account?
Sign In
Advertisement
in: Browse, Locations, Locations/Dungeons,
and 4 more
English

"Once a testament to mankind's defiance of Kain's empire, this towering cathedral now stood derelict, the humans who worshipped here, centuries dead. Its architects conceived this tower as a holy weapon against the vampire menace, a colossal instrument of brass and stone. The cathedral's pipes, once tuned to blast a deadly hymn, now stood silent, and these vacant spaces whistled their impotence."
―Raziel — Listen (file info)[src]

The Cathedral was a landmark in the events of Soul Reaver. Constructed by the humans as a holy weapon of destruction against Kain's empire, it was conceived to blast a deadly hymn which would destroy every vampiric creature on the face of Nosgoth. However, Zephon and the Zephonim murdered its guardians before its purpose was fulfilled. They coccooned themselves in the derelict Cathedral, now "a stifled titan [...] in mute surrender – unwilling host to a parasitic swarm."[Soul Reaver/Miscellaneous]

After Raziel's resurrection, Raziel sought out Zephon's lair, and defeated his brother. He consumed Zephon's soul, and proceeded to the Tomb of the Sarafan.

The Silenced Cathedral was a towering structure in northeastern Nosgoth that served as the primary Zephonim territory in ''Legacy of Kain: Soul Reaver''. The cathedral that once was used to emit soundwaves deadly to vampires, Zephon 's clan (Zephonim) have now taken it over, and the enormous reverberating pipes are silent.

The Silenced Cathedral was apparently built as a weapon against Kain's burgeoning vampire empire. It's complex arrangement of pipes channelled airflow with such force that when a musical note (of the right frequency) was played through them, it was deadly to vampires who came near. At some point in Kain's empire, the Cathedral was attacked, its inhabitants slain and the weapon disabled. Soon afterward, Zephon and his progeny moved in using the Cathedral as their home. Eventually various vampire worshipping humans also moved in.

When Raziel returned, centuries after his execution, he sought out Zephon after gaining the Soul Reaver as a weapon. He had to manipulate the airflow of the Cathedral to reach the upper spires where Zephon dwelt. When Raziel finally reached Zephon, he discovered that Zephon, like much of his clan had (d)evolved in insectoid fashion, with Zephon claiming that he had become infused with the building, effectively making him immobile, though it is likely he fed on the cocooned humans imprisoned elsewhere in the Cathedral. 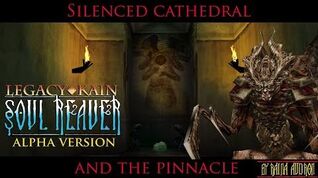 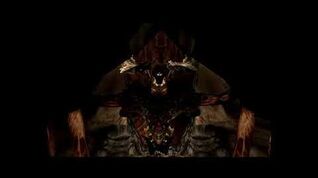 The cathedral has several elements that were changed during development and appeared differently in the alpha builds:

The Silenced Cathedral made an appearance in the multiplayer spin-off Nosgoth as one of the map areas where combat took place in the War for Nosgoth. The map was concentrated in an area nearby the previously seen areas of the Cathedral - apparently in a axillary supporting area carved from the cliffs beneath and incorporated much of the imagery that had been present in the Soul Reaver version of the area.

The area was initially named "The Nest" to reflect its placement and Zephonim occupancy, but this was subsequently changes to the Silenced Cathedral due to public feedback.

The exterior of the Silenced Cathedral could also be seen in the skyline above the Turelim Crucible map.

promotional render of the pinnacle of the Silenced Cathedral

The Pinnacle of the Silenced Cathedral (background, right) as it appears in the Legacy of Kain: Soul Reaver intro