In Blood Omen 2, Sebastian is encountered in a boss battle. The boss fight takes place at the heart of the Main Factory of the Industrial Quarter at the end of Chapter 6:The Nexus Stone.[1][2] When Kain entered the boss chamber, he was raised on a dias to the Nexus Stone suspended above him, however as Kain approached the stone, Sebastian revealed himself.[3] After a short conversation,[4][5][6][7] "Jon" (Sebastian's Industrial Worker confederate) lowered the dias into the chamber below and activated the steam jets, beginning the battle.

Like many of the Boss battles in Blood Omen 2, Sebastian's Boss Battle takes place over three phases:

A 'regular' combat battle, with a twist, as harmful steam jets rotate around the room. Sebastian used regular enemy combat techniques, including a red unblockable spin kick attack and a yellow power attack, in addition to an extended five hit combination (usually followed by a red attack). Kain had to hold the center platform and, along with blocking (thus filling the Rage Bar) and dodging attacks, the most useful technique was to knock Sebastian into the steam jets; either by using Fury, a combination, or a well timed grab attempt (when Sebastian tired); This burnt Sebastian, causing further damaging him, and causing him to 'telegraph' a red unblockable charge attack at Kain (which can be dodged and countered with Fury or combinations). When sufficiently damaged Sebastian changed tactics[3][8][Blood Omen 2]. Another option is to run in circles, getting close to the steam jets and avoiding them at the last moment. Sebastian will often get burnt. After a few of this episodes you will go to next phase.

Sebastian began to run in a circle around the walls of the chamber and a 'vortex' formed in the center of the room, forcing Kain off the center platform and into the path of the rotating steam jets. Kain had to move around the room following the steam jets as they circled the room, until Sebastian yelled a warning at Kain and stopped running; holding onto a wall and preparing to jump attack Kain. Kain however, could avoid this attack by positioning himself behind the vortex, causing Sebastian to jump into it himself. Sebastian would then begin running again (with the jets moving in the opposite direction) and Kain could repeat the above process until Sebastian was sufficiently damaged to order the dias to be raised[3][8][Blood Omen 2].

Sebastian had his accomplice raise the platform up to the Nexus Stone[9] and attempted to destroy the stone himself (should he succeed, the resulting explosion will kill Kain, and presumably Sebastian[10]) but Kain can prevent this by simply jumping up to the platform, making Sebastian jump off it. From the platform, Kain could see and Charm Sebastian's accomplice into activating the steam jets below, forcing Sebastian to jump back up to the tiny platform. The final sequence of the battle is an intense regularcombat fight in small area; atop the dias and surrounded by steam. Sebastian used combos and red attacks, but these could be countered by Kain's own combos and Fury strike; and Kain could also grab-throw Sebastian into the steam below[3][8][Blood Omen 2]. When defeated Sebastian fell off the platform into the steam below and Kain joined him as the steam subsided. Sebastian then revealed that the Nexus Stone had been linked to the Device; a great weapon buried underneath Meridian.[11][12][13] As Sebastian died, Kain absorbed the Dark Gift Berserk from him.[14][15]

(P1) Kain is lowered into the Steam Jets

(P1)Sebastian burnt by steam after a Fury Strike

(P2)Sebastian running around the chamber

(P2)Sebastian jumps into the central vortex 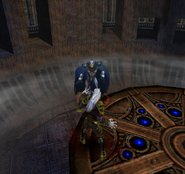 (P3)Sebastian and Kain fight above the steam

(P3)Sebastian defeated after he falls in the steam