Scimitars were a weapon wielded by Raziel in Soul Reaver 2. They were originally found in the hands of Greater Thralls . 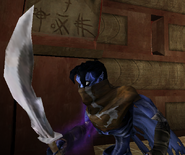 Retrieved from "https://legacyofkain.fandom.com/wiki/Scimitars_(Soul_Reaver_2)?oldid=188877"
Community content is available under CC-BY-SA unless otherwise noted.