Sarafan Templars were an Sarafan variant enemy class that were featured in Legacy of Kain: Defiance. They were the most "accomplished soldiers" of the Sarafan classes seen in Defiance and were seen predominantly in Kain's early chapters at the Pillars of Nosgoth.

Sarafan Templars were troops of the Sarafan faction, encountered by Kain in Nosgoth's early history at the start of Defiance. Templars wielded large claymore-style swords and a uniform with metallic looking armor and maroon or red clothing underneath. The Templars were highly trained and skilled in combat and were the only one of the Sarafan ranks in Defiance that was able to block attacks. They were fairly resilient and had fairly powerful attacks but lacked any ranged or charging attacks - generally meaning they were of a lower immediate priority in combat than other Sarafan classes such as Inquisitors, Archers and Zealots; though their skill put the above Crusaders.[Defiance][Defiance/5][Defiance strategy guide]

The Templars were first encountered in the the fifth chapter of Defiance Reveal the Guardian Citadel as Kain explored the Pillars of Nosgoth in Nosgoth's early history. Templars were only found in this chapter or and locale as Kain's later excursions were to areas lacking Sarafan activity.[Defiance][Defiance/5][Defiance strategy guide]

Like many of the Sarafan classes in Defiance, Templars could be 'enhanced' by the spells of Sarafan Inquisitors.[Defiance][Defiance/3][Defiance/5][Defiance strategy guide][Defiance manual]

" For Defiance we added Aikido style pants and color coding for the Sarafan.
It supposed to be a few years after SR2, so I evolved the armor from Roman to Crusader style armor"
―Daniel Cabuco[2] 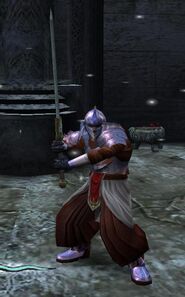 Retrieved from "https://legacyofkain.fandom.com/wiki/Sarafan_templars?oldid=189683"
Community content is available under CC-BY-SA unless otherwise noted.