Sarafan Crusaders were a Sarafan variant enemy class that were encountered by Kain in Legacy of Kain: Defiance. They were the lowest ranked of the Sarafan classes seen in Defiance and were seen predominantly in Kain's early chapters in Nosgoth's early history at the Sarafan Stronghold and the Pillars of Nosgoth.

Sarafan Crusaders were troops of the Sarafan faction, encountered by Kain in Nosgoth's early history at the start of Defiance. The Crusaders wielded a two-handed polearm and wore a uniform that had a metallic armor with purple clothing underneath of a similar shade to the Sarafan Archers - from whom they could be distinguished by weapons and attack style. The crusaders were described as faithful rank-and-file soldiers of the Sarafan with little training, hence they were a lower priority in combat than their brethren - the ranged attacking Archers, charging Zealots and skilled Templars. Crusaders aspired to reach the higher ranks of Templar or Inquisitor, but relative lack of skill meant they were ordinarily 'teamed' with the better ranks to attack and overwhelm Kain.[Defiance][Defiance/1][Defiance/3][Defiance/5][Defiance strategy guide]

The Crusaders had the distinction of being the first enemy encountered in the game - with three encountered and one killed in the opening cutscene as Kain returned to the Sarafan Stronghold in Nosgoth's early history in the chapter Infiltrate the Stronghold. They were also the first enemies to battle Kain in playable gameplay, confronting him on the initial 'street' section of the Stronghold. Thereafter Crusaders were one of the more common enemies of Kain's endeavors in Nosgoth's early history, confronting him throughout Infiltrate the Stronghold, Pursue Moebius and Reveal the Guardian Citadel.[Defiance][Defiance/1][Defiance/3][Defiance/5][Defiance strategy guide]

" For Defiance we added Aikido style pants and color coding for the Sarafan.
It supposed to be a few years after SR2, so I evolved the armor from Roman to Crusader style armor"
―Daniel Cabuco[1]

The uniform of the Crusader is a similar color to those worn by the Sarafan commanders Dumah or Malek - both of whom wore similar purple shades of clothing underneath their armor and also used pike/spear weapons. It is possible this was intended as a deliberate callback or the Sarafan using the martyred lieutenants as inspiration.[Soul Reaver 2][Soul Reaver 2/8][Soul Reaver 2/9] The same color was also used for the Dumahim banners in the events of of Legacy of Kain: Soul Reaver[Soul Reaver][Soul Reaver/2][Soul Reaver/6][Soul Reaver/12] 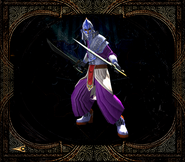