The Sarafan Warrior Inquisitors or simply Sarafan Inquisitors, were a highly ranked Sarafan class involved in the leadership of the order. The Inquisitor rank was hinted throughout the series before they appeared in Soul Reaver 2. Major characters that bore the rank (as Humans) included Melchiah, Zephon, Rahab, Dumah, Turel, Raziel and Sarafan Leader and last survivor of the class Malek. Ultimately, most of the Inquisitors (with the exception of Conflict Guardian Malek) were killed in a legendary assault upon the Sarafan Stronghold in Nosgoth's early history and were buried in the Tomb of the Sarafan.

The exact circumstances surrounding the formation of the warrior inquisitor faction is unknown, but it is suggested that the birth of Raziel and the other 'mortal' inquisitors occurred some time after the formation of the Sarafan brotherhood itself. The order would enter something of a 'golden age' as Raziel and his comrades (Turel,Dumah,Rahab, Zephon and Melchiah) joined the Sarafan and in the following years, they were promoted to the ranks of elite 'Sarafan warrior inquisitors'[1] with Raziel as their leader, apparently second only to Malek himself. At the height of the Sarafan crusades, the Sarafan Inquisitors began plotting to murder the last of the Ancient vampires Janos Audron,[2] seeing him as the "origin of the vampire plague"[3](likely derived from his role as father of the turned vampires).

Following a blue 'demon' (actually a future Wraith Raziel), the inquisitors were able to infiltrate the lair of infamous Janos Audron, armed with Moebius's vampire disabling staff.[4] After a confrontation with Janos,[5] the Sarafan warriors used the staff to subdue the ancient vampire as (human) Raziel murdered Janos by gouging out his heart.[6] Recovering the heart and the ancient Reaver blade,[7] the triumphant Sarafan returned to their stronghold, where the heart was christened as "The Heart of Darkness", in the belief that it had the power to restore vampire 'unlife'.[8][9]

In the aftermath of their greatest victory, the Sarafan would suffer their greatest defeat, as the murder of Janos provoked the ire of two of Nosgoth's most powerful inhabitants; The Wraith Raziel and the Vampire Vorador, both mentored to some degree by Janos himself. As the Sarafan retreated to the stronghold, they were already being pursued by Wraith Raziel, who used his Wraith Blade enhancements to enter the Stronghold. Shortly after, Raziel found the Reaver laid across his path in one of the stronghold's chambers.[10] As he hesitantly investigated the blade, he was confronted by Malek and Time Guardian Moebius, and with Moebius's Staff disabling Raziel's wraith blade Raziel was forced to use the Reaver as his only choice of weapon.[11][12]

Meanwhile in a different part of the Stronghold, Vorador had begun his own revenge attack, targeting the circle for their sponsorship of the crusades.[13] As they cried for the aid of Malek, six members of the Circle of Nine were slaughtered by Vorador. But with Moebius keeping Malek occupied until the Wraith Raziel picked up the Reaver,[14][15] Malek was delayed and arrived too late to save the guardians. As the paladin arrived he was ambushed by Vorador and defeated in combat, but the old vampire left Malek alive to suffer for his failure to protect the circle. At the same time, Raziel had been diverted a different path through the stronghold and was now bound to the Reaver,[16] making him invincible

.[17] As he progressed through the stronghold he was channeled into combat against the most formidable Sarafan warriors, the Sarafan warrior inquisitors.Relishing as he faced those who had served him as his brothers in both his human and vampire lives,[18][19][20] Raziel killed each of the Sarafan inquisitors in turn, before being confronted with the human inquisitor Raziel, one of the most formidable warriors in the order.[21][22] After a long and vicious duel, the Wraith Raziel killed his former human self, thus making circle of his life complete;[23] but he was unable to recover the Heart of Darkness, which remained hidden.

The attacks on the stronghold, at very heart of Sarafan power, proved costly for the order. With the deaths of the Warrior inquisitors Melchiah, Zephon, Rahab, Dumah, Turel and Raziel, the Sarafan were deprived of several influential members of their leadership and most of the inquisitors were buried as martyred "Sarafan saints" in the Tomb of the Sarafan.[24][25] For his failure to protect the circle, surviving Sarafan inquisitor and leader Malek was punished by Death Guardian Mortanius, with his soul imprisoned in a suit of armor, depriving him of the "pleasures of the flesh", leaving him not only in disgrace and humiliation, but also consumed by vengeance as his punishment was all Vorador's fault.[26][27][28] Arguably, the Sarafan would never fully recover from the attacks on the stronghold and the event began a decline which presumably eventually led to the downfall of the order.

Much of the important events involving the Sarafan Warrior Inquisitors were revealed in Blood Omen: Legacy of Kain through the history of the Sarafan brotherhood, though the inquisitors were not overtly mentioned[Blood Omen].In the events of Blood Omen, legends told of the murder of Janos Audron [9][29][30] and the subsequent Slaughter of the Circle by Vorador,[31][32] as well as Malek's punishment for his failure to protect the circle[26][28]). The crusades of the Sarafan were long over by this time and the exact leadership structure of the order was not conclusively explored, though Conflict Guardian Malek was identified as the leader of the Sarafan and "last of the Sarafan sorcerer-priests".[33]

The leadership of the Sarafan was explored further in Legacy of Kain: Soul Reaver as Raziel found the long-sealed Tomb of the Sarafan, uncovered by Nosgoth's cataclysms in the events of Soul Reaver[Soul Reaver].Entering the tomb, Raziel recalled legends of the "Sarafan warrior priests" and their "merciless war against the vampire tribes of Nosgoth", regarding them coldly as "murderers enshrined".[34] Inside the tomb Raziel found the "defiled" tombs of martyred ""Sarafan saints", bearing the names of himself and his former vampire brothers (Turel, Dumah, Rahab, Zephon and Melchiah) as well as vacant space for Sarafan leader Malek (presumably unused due to his punishment and notably vandalized). The tomb suggested that Raziel and his brothers were highly influential in Sarafan order, of equal status to Sarafan leader Malek.[Soul Reaver].[24][25]

In the final climactic scenes of Soul Reaver 2, Raziel was able to revisit the important events of Sarafan history and discover the truth behind the artistic depictions he had seen before, finding that it was the Sarafan inquisitors that had attacked Janos Audron's Retreat,[4] murdered Janos,[6] and stolen the Heart of Darkness and the Reaver;[7] with the human Raziel leading the group and personally responsible for the act.[4][6] This revelation caused Raziel to reject his former humanity and pursue the retreating inquisitors to their stronghold, attempting to recover the Reaver and the Heart of Darkness,[39] with his attack unwittingly coinciding with Vorador's legendary assault.[13] After recovering the Reaver (and delaying Inquisitor Malek) [14][15] Raziel was confronted by the remaining Sarafan Inquisitors (including his former human self).[18][19][20][21][22] With Raziel made invincible by the Reaver, he was easily able to dispatch them[17][23] and took particular pleasure as he discovered that he was their murderer and finally understood "Kain’s blasphemous, private joke" and his own role in the downfall of the order.[19]

Though much of the leadership of the Sarafan had fallen by the time of Kain's return to the Sarafan stronghold in Legacy of Kain: Defiance, he found several depictions of Sarafan inquisitor and leader Malek[Defiance],[40] as well as seven thrones in the tower of the stronghold[Defiance]; apparently a 'council chamber' of sorts for the late inquisitor group.

The Sarafan Warrior Inqusitor group (as suggested by the Tomb of the Sarafan) included seven inquisitors: Malek, Raziel, Turel, Dumah, Rahab, Zephon and Melchiah. Though the inquisitor rank is clearly at the highest rank of the Sarafan brotherhood faction, the exact rankings within the group are less obvious. The Sarafan crusades as a whole were acknowledged to be led by Malek,[41][42][43][44] presumably suggesting he would be the highest ranked of the group, however Raziel is referred to on several occasions as the "Head"[6] or "Grand Inquisitor"[45](with his armor appropriately displaying much more ornate and intricate detail than the other inquisitors) and he displayed seniority over the rest of the inquisitor group at least, though he is still on occasion referred to as a "Sarafan lieutanant".[46] The remaining individual inquisitors were apparently ranked in the same order as their later vampire lives (Turel, Dumah, Rahab, Zephon and Melchiah).[20] The features of the Tomb of the Sarafan[Soul Reaver]and the 'upper tower' of the Sarafan Stronghold[Defiance]may suggest that the inquisitor group formed a 'council' of sorts to preside over the Sarafan crusades. 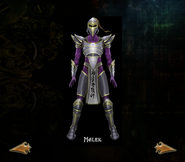 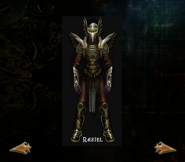 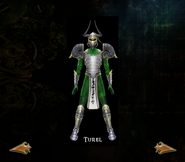 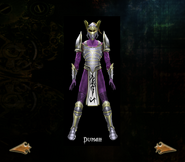 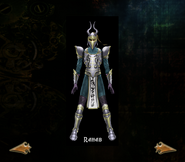 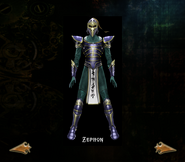 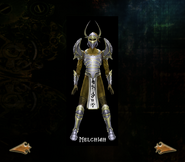 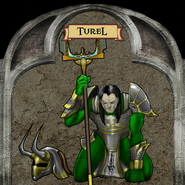 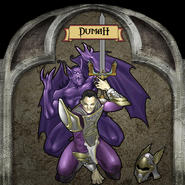 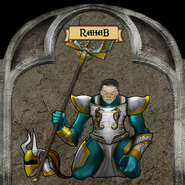 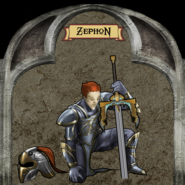 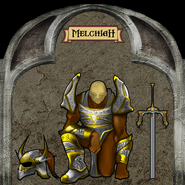 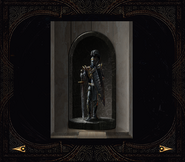 This article is about the high-ranked Sarafan Inquisitors encountered primarily as 'bosses' in Soul Reaver 2. For the similarly named Sarafan spell-casters encountered in Defiance, see Sarafan inquisitors.