"It seemed my method of entering the physical realm was not altogether original. But where had these beings come from?"
―Raziel[src]

Revenants were a creature class encountered in Legacy of Kain: Defiance. They were skeletal corpses that had been animated and possessed by powerful hylden who used the corpses to cross from the Demon Realm into the Material Realm. Revenants were a common enemy of Raziel in Defiance and could be seen in a variety of different types through the title. 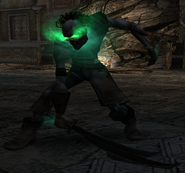 A Human Revenant
Add an image to this gallery

Revenants came in a number of different varieties and types - generally separated around the race of the corpse being possessed:

The Vampires' ancient enemies, banished into another dimension by the Pillars' sorcery, have devised other means to influence events within Nosgoth. As the Pillars decay, the Binding weakens – the membrane between the dimensions grows thin, enabling these entities to possess both human hosts and the moldering flesh of corpses. They may enter the physical world in this form, rising from the grave to assail Kain and Raziel.
―The Eidos Interactive website[Square Enix website]
Revenants were once normal corpses that have been possessed by disconnected Hylden souls. Usually these appear in the old and ruined places of Nosgoth where ancient corpses lie buried from forgotten battles. However, there are few places in Nosgoth free from conflict at one point or another. As with all Hylden possession, the Revenants eyes glow a sickly shade of green. They fight with aggressive abandon with the very rusted and broken weapons that failed to protect them in life.
―Legacy of Kain: Defiance: Prima's Official Strategy Guide[Defiance strategy guide]

Revenants are likely based on the Revenants of European folklore.

Retrieved from "https://legacyofkain.fandom.com/wiki/Revenants?oldid=186171"
Community content is available under CC-BY-SA unless otherwise noted.