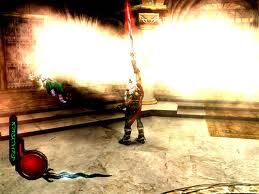 The Reaver Spell are similar in many respects to the Glyphs present in Soul Reaver and the Pillar Glyphs removed from Soul Reaver 2 . The mechanic of filling the Reaver gauge is clearly reminiscent of Kain's Rage Bar in Blood Omen 2 (which was filled by blocking attacks) and Raziel's Reaver bar in Soul Reaver 2 (filled by attacking with the Wraith Blade)

The Reaver Spells fill out the extra abilities intended for the Reavers Raziel obtained in Soul Reaver 2.

The Reaver Spell of the Soul Reaver is ineffective ingame, this is probably because it was only intended to be used during the final boss sequence with The Elder God .