Legacy of Kain Wiki
Register
Don't have an account?
Sign In
Advertisement
in: Browse, Inhabitants, Inhabitants/Factions,
and 3 more
English

The Rahabim are a clan of vampires in Legacy of Kain: Soul Reaver. They are the descendants of the lieutenant Rahab.

The primary territory of the Rahabim is the Drowned Abbey and they are also encountered around the Water Glyph Altar inside the Human Citadel.

As with all the clans seen in Legacy of Kain: Soul Reaver, the Rahabim are split into two distinct active types: the older, stronger and more evolved adult Rahabim, and the younger, weaker and less evolved fledgling Rahabim. They are also encountered in their inactive pupating state.[Soul Reaver manual (US)][Soul Reaver manual (UK)]

The Rahabim clan are the masters of the waters of Nosgoth. They were “devastated even by the feeble rays of Nosgoth’s sun”, but managed somehow to ”overcome their vulnerability to water”, thus making them predators both on land and sea.[Soul Reaver manual (UK)]

They were the only vampires in Nosgoth to withstand the acidic touch of water effortlessly, which gave them a bigger freedom of movement during hunting. Their swimming skills were superior over humans as they could glide in water with ease with a swimming pattern resembling a fish or a snake. They were also capable of lunging themselves out of the water at any unsuspecting prey. It appears they had both lungs and gills as they were amphibious in nature and could breathe on land and sea equally.

Daniel Cabuco described their adaptibility to water as the following: "As for spare time, Rahabim would have been trying to overcome their weakness to water by trying to improve the time they could spend in contact with it. Perhaps drinking blood at the same time the water burned them so their systems could heal and slowly, painfully adapt."[1]

As primarily sea based creatures, their movements are a bit slower on land, however their bite is just as deadly and they can also utilize their spitting attack. The spitting attack comes from their mouth and is described as "a foul water bubble" which is deadly to all besides the Rahabim.[2] However, they cannot shoot in steep angles upward or downward. When fully submerged, they will mostly – if not always – use their biting attacks. When prey is at a distance on land, they will attempt to shoot it down instead of closing the distance (this behaviour is similar to a archerfish as described by Daniel Cabuco). [3] [4]

Their territory is the Drowned Abbey. It is of human origin which served as a sanctuary in the past. It is unknown when the humans abandoned the area, when was it drowned, or when the Rahabim took over, but the central chapel served as a personal chamber for Rahab. It is further implied with yet officially unsupported claims that the Abbey belonged to the possession of the Turelim for a period of time, due to wall murals possibly signifying their conquest outside on the walls of Rahab’s chamber, and – in the beta version of the game – the sighting of a dead and burned Turelim under water in the constrictable drill chamber. It is a possibility that after the Abbey was drowned by water, the Turelim withdrawn and Rahab with his clan took over the area instead.

The clan pupating method was observed in the form of a seemingly algae covered webby cocoon latched to the water floor with a sleeping sphere in it. It was tied or anchored to the ground with a thread like substance which was strong enough to withold the pupating pod against the underwater currents. Some more vigilant individuals could ambush from this state, like all other seen pupating methods.

The lead artist of the Legacy of Kain series, Daniel Cabuco, described Rahabim´s role as "artisans, explorers, special forces".[5] It is likely they have been used as scouts to spy on the humans in the City, as one fledgling Rahabim is found by Raziel in the water reservoir of the City.

Along with clan leader Rahab, two types of Rahabim vampire were seen in Legacy of Kain: Soul Reaver: Fledglings and Adults. Both the fledlings and the adults have a distinct features on their backs - two large curved fins, which in the case of adults have tattoos resembling the Rahabim clan symbol.

Fledgling Rahabim are a type of enemy in Legacy of Kain: Soul Reaver. They are vampires and the descendants of the lieutenant Rahab. They are the younger, less evolved members of Rahab's clan.

Adult Rahabim are a type of enemy in Legacy of Kain: Soul Reaver. They are vampires and the descendants of the lieutenant Rahab. They are the older, more evolved members of Rahab's clan, in contrast to fledgling Rahabim with glowing red eyes.

"I imagine it would have started with him being burned by water, and drinking blood to heal. Being in a land with a lot of water, I'm sure he'd be somewhat bitter over the "land" he was given. Perhaps the humans who lived in the area found security by creating great waterfalls and moats, making him even more angry at their impudence. (They feel safe in MY LANDS, those cattle!)
So I imagine he'd start draining blood while exposing himself to water more and more. Casting Kain's water breathing and protection spells so often that they'd weave themselves into his being. Taking one of Kain's gifts and turning it into his entire being.. Kain could only resist water temporarily.. but what if Rahab could actually ADAPT to it! He'd be so powerful and valuable.. he and his kind could go places others never could.. not even Raziel! That kind of motivation and jealousy strikes true with me.
So he'd burn and heal, drink blood and immerse.. perhaps doing so at the same time (Telekinetically drinking) until the image I painted happened: The gills.. the GILLS! They symbolize his newfound power, one that he would present to Kain in court, to drive the others into jealousy and supplication to him. He'd move up the chain of value.. become Kain's favored for that decade.. maybe that century!
The pain didn't matter.. only success."
―Daniel Cabuco[6] 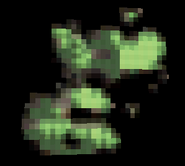 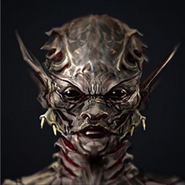