Enemies article
The Possessed in Defiance.

The Possessed were a enemy class encountered in Legacy of Kain: Defiance. Part of the Possessed sub-grouping, the Possessed were created by Hylden souls originating in the Demon Realm entering the Material Realm through Possession of a living human - enabling them to take over control and enhance the strength of the subject. The creation of these enemies required living humans so they were usually seen in areas with frequent human activity like the Pillars and Avernus Cathedral.

The Possessed were first seen in the chapter Find the Location of Vorador's Mansion where one of the class was shown to possess a Vampire Hunter Sorceress. Thereafter the Possessed were able to take control of human classes throughout the rest of the game and and could attack without warning and bolster the strength of the classes. When possessed enemy troops were known to abandon their weapons and regular attacks and instead attack using 'claw swipes' and jump attacks.[Defiance][Defiance/6][Defiance strategy guide]

In terms of appearance, the Possessed appeared to be identical to the humans they had possessed save for the distinctive green glowing eyes indicative of Hylden possession.[Defiance][Defiance strategy guide] 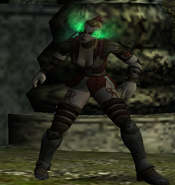 Enemy reactions to Possessed troops
Add an image to this gallery

Retrieved from "https://legacyofkain.fandom.com/wiki/Possessed_(enemies)?oldid=187115"
Community content is available under CC-BY-SA unless otherwise noted.