Legacy of Kain Wiki
Register
Don't have an account?
Sign In
Advertisement
in: Browse, Characters, Characters/Defiance minor characters,
and 3 more

The original Guardian of Nature

The original Guardian of Nature

Characters article
The original Guardian of Nature in Defiance.

"Rejoice, creature, for today your spirit will return to the One..."
―Nature Guardian[src]

The original Nature Guardian belonged to the race of the Ancient Vampires and was fought by Raziel in the Fire Forge. Her name was unknown and only her wraith form was encountered. Raziel absorbed the Guardian's soul (and that of the Original Conflict Guardian) into the wraith-blade, imbuing it with Elemental Fire.

She was dressed in blue garbs with a large, sweeping feathered headdress on her head. Her visage reflected long dwelling within the Spectral Realm as a wraith after she died.

As Raziel approached her tomb the Nature Guardian appeared. During the battle the Guardian was assisted by Tentacles. From a distance she launched telekinetic energy that could be counter with a quick TK Blast. While up close she would attempt to attack Raziel with her claws or send him flying with a telekinetic burst.

The Nature Guardian in material in the Prima Guide 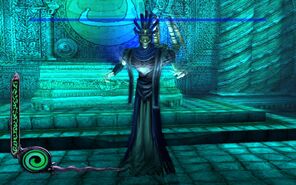 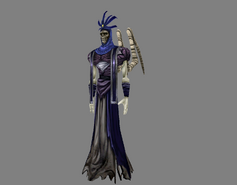 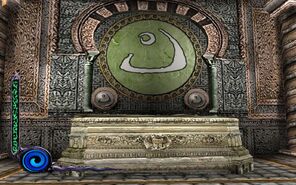 tomb of the nature guardian