Legacy of Kain Wiki
Register
Don't have an account?
Sign In
Advertisement
in: Blood Omen 2, Blood Omen, Browse,
and 13 more

"Away from the influence of Moebius’s cursed staff, I could feel the strength of the Soul Reaver slowly returning. If that orb was as debilitating to vampires as it was to the blade, it gave Moebius a powerful advantage over his enemies. I finally understood how Moebius’s crusade could decimate the vampires so successfully. If he could immobilize his enemies, they were at his mercy."
―Raziel[src]

Moebius's Staff, also referred to as the scepter, was a powerful staff wielded by Moebius the Time Streamer, the long-lived Guardian of the Pillar of Time. Although functional as an ornate walking stick, its true potency lay in the giant pearl which served as its headpiece; this ancient orb was capable of afflicting any vampire with debilitating pain, rendering them helpless. Using this incredible advantage over his enemies, Moebius was able to orchestrate the human revolt and the crusades of his mercenary army with extreme efficacy, devastating the vampire race. Thus, the Staff played a very significant role in facilitating Nosgoth's history.

The Staff was first featured in Blood Omen: Legacy of Kain, appearing as a wooden staff with a golden cap and topped with a blue pearl-like orb. The staff was wielded by Moebius in all of his appearances, but had little plot significance - with the powers of the staff not explicitly used by Moebius and the focus of Moebius's power and his Pillar token being Moebius's Hourglass. Moebius had his staff when presiding over Vorador's execution and though he had the staff in his possession during his battle with the fledgling Kain, he did not employ it and the staff was missing from the final cutscene where Kain killed Moebius.[Blood Omen][Blood Omen/5][Blood Omen/10][Blood Omen/11][Blood Omen/Miscellaneous]

"This orb disables our vampire enemies, leaving them helpless and incapacitated. Strangely, it seems to have the same effect on that peculiar weapon of yours."
―Moebius[src]

Travelling to Nosgoth's early history, Raziel would find that the staff also had a significant role in the success of the Sarafan, witnessing the sarafan commanders using it to subdue Janos Audron and slowly torture him before removing his heart.[Soul Reaver 2/8][Soul Reaver 2/9] Raziel would pursue the retreating Sarafan back to their stronghold, intent on revenge, but he was cornered by Moebius and Malek, with Moebius using the staff to disable the Wraith Blade once again and forcing Raziel to take up the physical Reaver - which would later attempt to consume him.[Soul Reaver 2/9]

The Staff would be depicted again in Blood Omen 2 with a large statue of Moebius present in the timeless Eternal Prison. Tricking Magnus into charging the staff and toppling the statue were crucial steps to defeating Magnus in his boss battle.[Blood Omen 2][Blood Omen 2/8]

"How remarkable that the great Kain should succumb to the scepter's power like any common vampire."
―Moebius[src]

Returning to the Sarafan Stronghold in Nosgoth's early history to question Moebius as to Raziel's whereabouts, Kain fell victim to the staff when he met Moebius in the tower of the stronghold. Moebius marveled in amusement at how the staff affected "the Great Kain" the same as it would any common vampire.[Defiance/1] When Kain next caught up to Moebius, seeking to question him again, he first removed the staff from Moebius' possession with his Telekinesis before continuing their meeting "on a somewhat different footing".[Defiance/3] Later as he investigated the Vampire Citadel, Kain would uncover murals depicting the early history of the staff, revealing that Before Nosgoth's recorded history the Staff had been used by Moebius in a bloody Human revolt against their Ancient vampires masters.[Defiance/9]

Later in the events of Blood Omen, Raziel would again encounter Moebius and his staff in Vorador's Mansion after apparently killing the Elder Kain for the Heart of Darkness, but on this occasion Moebius did not employ the staff against Raziel.[Defiance/12] After his death at the hands of the fledgling Kain Moebius was resurrected by the Elder God and returned to the Spirit Forge in the Vampire Citadel, once again wielding the staff. When the inexplicably alive Elder Kain appeared behind Moebius, the staff proved useless against the "heartless" Kain, who enjoyed a moment of amusement at the Time Streamer's impotence before he proceeded to kill Moebius for the second time. After Moebius's death, whilst Kain hesitantly examined the staff, Raziel used Moebius' corpse to return to the physical world and complete his destiny. Following the Purification of Kain, the staff was likely buried or destroyed by falling rubble as the citadel collapsed.[Defiance/13]

Moebius's Staff first appeared in Blood Omen: Legacy of Kain as a simple wooden staff topped by a blue orb, but it had no significance to the story of the game and its vampire-debilitating powers (not established until Soul Reaver 2) were not obviously demonstrated. When asked how Moebius's army succeeded in capturing Vorador, Silicon Knights' online FAQ, The Complete Guide To Legacy of Kain, mentioned that "the vampire hunters have been capturing vampires for years. They have ways of restraining them, magically or otherwise. Keep in mind that this is a new present, and the (present) vampire hunters are very good at their jobs". It did not identify the Staff as a factor in their success and it is likely that they did not intend for the staff to be used in such a fashion.[1]

The Staff was given a greater role in Soul Reaver 2 under Crystal Dynamics direction. The powers of the staff were established (and implicated in the crusades of the Sarafan and Vampire hunters) and the staff itself was redesigned, with the orb atop the staff noticeably growing in size and a snake coiling up the staff and devouring the orb added. Artist Daniel Cabuco explained the changes: "Originally it only had the sphere at the top of the staff, but I decided to wrap a snake around it and make like it was swallowing a giant egg. Thats what happens when you watch discovery channel while painting concepts. This also tied in with the oroboris [sic] concept of the snake eating itself, which is a primary theme in Soul Reaver 2."[2]

Elaborating further on the origins and design of the Staff, Cabuco commented: "The Staff of Moebius was created during the time of the Ancient vampires, when they were experimenting with Necromancy and Soul Stealing. The Orb itself was created within the forges of their Weaponsmiths and Necromancers (partially driven mad by the whispering Elder God) and imbued with the ability to possess the hearts of other Vampires. It's forged out of a giant Pearl, the only one in existence, and imbued with magics that made it crystal clear with a pearlescent blue finish. The snake represents the snuffing of the their hearts, as if paralyzed by venom, then slowly crushed and devoured. This is the pain Kain felt in his chest when he first encountered it, and why he was unable to even move despite being one of the strongest vampires to ever exist. Whichever Vampire held this could manipulate, perhaps even rule over others. Moebius was given the knowledge of this weapon by the Elder. Once he had it, starting the uprising against the Vampires became much easier."[3]

Moebius with the staff upon at Vorador's execution (BO1)

The flashback of Moebius with the staff (BO1)

Moebius and staff in the Oracle's Caves (BO1 Credits)

BO1 Wallpaper with Moebius and staff 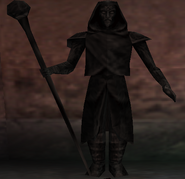 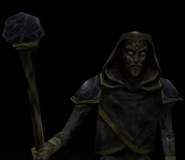 Moebius and staff in SR1

Moebius and staff in SR1 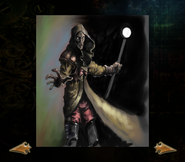 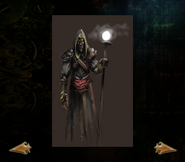 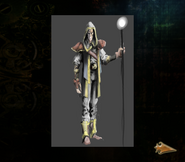 Moebius with the staff in the Soul Reaver 2 prologue

The Sarafan commanders use the staff to subdue Janos

Moebius with his staff in the Stronghold

BO2 statue of Moebius and staff 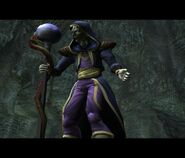 Moebius with his staff (Defiance)

Moebius trying to stop Kain with his staff 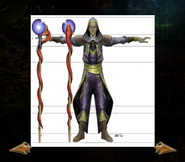