"When in mist form, I am invulnerable to physical weapons, blade and claw! I can seep through locked doors and cracks and move swiftly, like a shadow fleeing light."
―Kain — Listen (file info)

Mist also known as Mist form was an ability Kain discovered in Blood Omen, which has reappeared several times throughout the Blood Omen arc of the series.

Initially Kain discovered Mist form in the Mist Form Dungeon in the Termogent Forest Swamp in Blood Omen, where it was most useful for crossing large bodies of water and seeping through cracks to gain entry to new rooms. In this form, Kain could be destroyed by vortexes however[Blood Omen].[1][2][3][4]

The ability made a return in Blood Omen 2, where it was one of Kain's few abilities to survive his brush with death and was his first 'Dark Gift' from that game.[5] Mist was used primarily in Blood Omen 2 to aid stealth, enabling him to effectively disappear in low level fog and whilst in this form, he could evade or perform one hit 'stealth kills ' upon enemies.[6][7][8] Certain enemies, notably the Sarafan Glyph guards and Glyph knights had special armour that could detect a vampire nearby - they weren't able to see Kain (unless he moved directly in front of them), but it did make stealth kills much harder to perform upon them, if not impossible[9][10][11][Blood Omen 2].

Legacy of Kain: Defiance again showcased the Mist form, this time much more developed. Along with allowing Kain to pass through grates and the like (Kain's Material Realm answer to Raziel 's 'Phase Through Gates ' ability), Kain now used his mist form in combat allowing him to effectively dodge enemy attack without having to move far (Raziel would have to rely on greater speed to effectively dodge.)[12][13][Defiance] 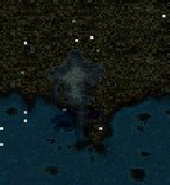 Kain using Mist to get through a grate

This article is about the ability used by Kain which allowed him to turn into Mist. For The environmental mist necessary to assume mist form in Blood Omen 2, see Mist (Blood Omen 2). For The 'ominous' mist encountered by Raziel in the Spectral Realm in Defiance, see Mist (Defiance).