In Blood Omen 2, Marcus is encountered in a Boss Battle. The Boss fight takes place in Meridian Cathedral, when Kain is finally able to enter the building at the end of Chapter 4:The Upper City.[1] Unlike fellow 'traitor vampire' Faustus, Marcus made himself known to Kain early in the level and much of Chapter 4: The Upper City ended up being a race between Marcus and Kain to reach the Bishop of Meridian[2] (at the Bishop's Manor[3][4] and Meridian Cathedral[5] respectively).

When Kain returned to the Cathedral, he found Marcus had control of the Bishop of Meridian (using his Dark Gift - Charm). Kain threatened Marcus and participated in another short 'prelude' chase[6][7] before Kain and Marcus fell through the roof of the Cathedral. Once Kain had 'cornered' Marcus in the Cathedral, the boss battle followed the usual '3 phase' pattern, seen throughout Blood Omen 2 bosses.

A brief chase following Marcus after he has fled from Kain; after Kain found Marcus in control of the Bishop of Meridian in the private chambers of the Cathedral, Kain and threatened Marcus, who fled out to the street.[6] Kain gave chase, following up some ladders to the rooftops and onto the stained glass roof of Meridian Cathedral itself, which collapsed, trapping the two vampires in the Cathedral[7][Blood Omen 2].

A battle with Marcus in the lower levels of the Cathedral. Marcus becomes invisible, only 'appearing' to strike Kain with red attacks. Marcus invisibility made him incredibly difficult to strike, instead Kain had to use two levers hidden in alcoves in opposite sides of the Cathedral, which when activated, rang the Cathedral bells, apparently dazing and causing some pain to Marcus. Once Marcus was dazed Kain had a small window of opportunity to strike back with his own combo or Fury strike (before Marcus would respond with his own red attack). Kain could repeat this process (by alternating levers) until Marcus summoned two Sarafan Priests to cut the ropes to the bells and retreated to the upper level of the Cathedral.[7][8][Blood Omen 2].

Kain follows Marcus up some stairs to the upper level balconies, where Marcus summons more Sarafan Priests to attack Kain (these Sarafan Priests fire crossbows at Kain and do not drop weapons; they will also 'respawn' when killed). Marcus will run around the top level of the Cathedral; he can be targeted up close using Kain's claws, or from a distance using a Jump attack. As he runs around, he will also repeatedly pause on the edges of the circular balconies and can be attacked by targeting a well timed Jump attack across from balcony to balcony and following this up with close range attacks until Marcus flees; repeating the process as Marcus ran by. Frustrated Marcus will again begin to use his invisibility.[7][8][Blood Omen 2].

Marcus turns invisible and actively starts to seek out and attack Kain as he runs around (using yellow attacks -though his use of invisibility seems a little 'compromised' by his damage). Kain could use the grab-throw technique on one of the Sarafan Priests and throw them into the bells (causing Marcus to suffer the same effects as in Phase One) or continue to use the Jump attack and close quarters technique (used in Phase Two) and take advantage of Marcus' compromised invisibility.[7][8][Blood Omen 2].

When Marcus was defeated he landed "unceremoniously" on the Cathedral's altar and Kain absorbed the Charm Dark Gift from him.[9][Blood Omen 2]

Marcus reveals he is in control of the Bishop

Kain chases Marcus over the rooftops

The Cathedral roof gives way under Marcus and Kain

Kain and Marcus fall through the roof 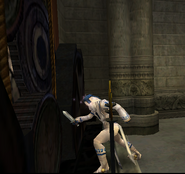 Marcus falls onto the altar

Marcus dies on the altar