In Blood Omen 2, Magnus is encountered in a boss battle. The boss fight takes place at the end of Chapter 8:The Eternal Prison.[1] After Kain had found (and killed) the Builder he attempted to escape the Eternal Prison, but found that the 'insane vampire' (Magnus) that had dogged his steps through the prison,[2][3][4][5][6][7] was still following him.[8] Kain entered into a short 'prelude phase' to the boss battle, through an 'invisible maze' (where the walls only appeared if Kain got very close to them),during which he was taunted by Magnus.[9] When Kain reached the other side he entered a large courtyard with several large Prison Guardian statues surrounding a central pool of water; where the initial phase of the battle took place.


Like many of the Boss battles in Blood Omen 2, once Magnus has reached his 'boss chamber', the battle takes place over three phases:

A brief 'puzzle' before the boss encounter with Magnus apparently following Kain through an 'invisible maze' (a darkened room in which the walls only appeared as Kain got within a few steps). On three occasions through the maze, Kain would be trapped (lured in by Lore coffers) in a single 'square' with a trap (either a spiked ceiling or pit in the floor) ready to kill him as Magnus taunted him. Kain, however could escape by using Telekinesis to activate nearby Glyph seals to free himself and make his way through to Magnus' boss chamber[9][Blood Omen 2].

A 'Dark Gift' battle in an outer courtyard in the Prison; the courtyard featured a large circular pool surrounded by Prison Guardian statues. When Magnus entered, he jumped up to a broken plinth in the center of the pool and attempted to kill Kain using Immolate (this would result in a 'instant-kill' death). To avoid this attack, Kain had to take cover behind one of the statues; this would cause the Immolate attack to shatter the statue, blowing up Kain's cover but allowing him a short window of opportunity to attempt to shoot Magnus off his platform and into the water using Telekinesis. This process could then repeated using different statues until Magnus had been knocked into the water three times, which would cause him to retreat down to a lower courtyard[8][10][11][Blood Omen 2].

Magnus retreated to a lower courtyard that was littered with debris and had a large raised pedestal at the back of the arena and several statues in alcoves. Magnus would repeatedly attempt to charge at Kain utilising a red attack(though the debris on the floor often obstructed his attempts). To progress,Kain had to use the four Prison Guardian statues holding scythes; luring Magnus (by using Telekinesis against him) into charging into each of the scythes. This would cause each statue to rise up, showing a Glyph Seal underneath their feet. Once all four seals were activated, the debris in the courtyard cleared, re-forming into a huge statue depicting Moebius the Time Streamer[8][11][Blood Omen 2].

With the courtyard cleared it was now much more open to Magnus' red charge attack (however like phase two, Magnus' mental state seems to prevent consistent targeting of Kain). In a similar fashion to phase two, the object was to lure Magnus into charging the infinity sign beneath the large Moebius statue. Kain could use Telekinesis to provoke a charge into the at the statue; the first hit would break the statue, knocking the bottom off of Moebius's Staff, the second (though some guides claim three hits are required) would cause the statue to topple, nearly crushing Magnus and causing him to regain his memory[8][11][Blood Omen 2]. After a short conversation, Magnus died and Kain absorbed his Dark Gift, Immolate.[12][13]

(P1)Magnus uses Immolate on a statue

Phase 2 Boss room (from above) 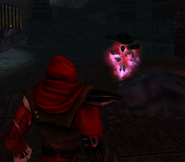 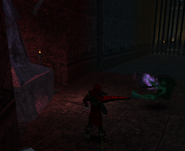