Locations article
The opening area of the Lower City

The Lower City is a playable location in Meridian featured in Blood Omen 2 . In Darkness We Gather takes place entirely in the Lower City.

When Kain was first roused by Umah he found himself in the Slums. Once trained, Umah suggested that they should travel to Sanctuary in the Lower City and meet the mysterious leader of the Cabal . Unfortunately they were separated by a Ward Gate and Kain was forced to find an alternate route through the Smuggler's Den and Smuggler's Tunnel to find a hidden passage to the Lower City.

The Lower City itself was the first part of Meridian Kain encountered that was regularly patrolled and 'looked after' by the Sarafan,[1] the streets were all paved (or cobbled) and were well lit and clean, including large symbols and statues. (in stark contrast to the more run-down appearance of the Slums and the Smuggler's Den.). The Lower City had a bigger population than any of the areas Kain had encountered so far; hence he could overhear many conversations and read many signs and posters. There were also a variety of businesses and amenities in the area. The majority of the Lower City seemed to be centred around a long wide 'main street' that was broken up by Ward Gates[Blood Omen 2].

When Kain arrived in the Lower City he met Umah once again, she had been sent on a mission to investigate the Industrial Quarter and instead of guiding Kain to Sanctuary personally,[2] she directed Kain on a complicated trail that led him to get information from Cabal contacts the Tapster[3] of the Red Raven Pub and The News Vendor.[4] Using many different methods to bypass the Ward Gates on the Main street (including using sewers and rooftops, using workers passwords, breaking into shop and houses, vandalising his way through a warehouse and finally deactivating the Ward Gates[Blood Omen 2].) Kain was able to find the Blue Lady Curios shop that hid Sanctuary.[5] He was briefly distracted by Sebastian (who Kain did not yet remember) before he entered Sanctuary and met the Cabal and it's leader, Vorador .

Inside Sanctuary, the meeting was interrupted by an Injured Cabal Vampire who told Vorador that Umah had been captured by the Sarafan, after discovering the something significant in the Industrial Quarter.[6] With Umah taken to the Sarafan Keep, Vorador sent Kain to find out the location of the secret entrance to the Sarafan Keep from the Bishop of Meridian in the Upper City.[7]

The Red Raven Pub was a drinking establishment in the Lower City of Meridian, featured in Blood Omen 2 . Kain met Cabal contact the Tapster here.

Inside, the pub was larger than the T&A Tavern, and had more customers and a more 'bustling' atmosphere. There were a series of tables along one side of the room, lit with 'Glyph Lights' and two 'dartboard' style targets on the wall next to the entrance. At the end of the room there was a large fireplace, and several barrels. The interior wall were decorated with Sarafan 'Propaganda' Posters as well as several portraits[Blood Omen 2].

Meeting the Tapster, Kain received the message that the Tapster had been given; telling Kain to search for the News Vendor further along the Streets, who could provide Kain with the location of Sanctuary and giving Kain the information he needed to pass gatekeeper Duncan (by telling him he worked for Ducket's Traders)[4][11] Kain left to Pub to continue investigating the Lower City and find Sanctuary[Blood Omen 2].

The Interior of the Red Raven Pub~

The Ducket's Traders Warehouse was a trading business in Meridian, featured in Chapter 3: The Lower City[17].

Making his way through the Lower City, Kain's progress was stopped by gatekeeper Duncan, who refused to let Kain through a gate to the workers area unless Kain told him who he worked for[18]. Visiting Cabal contact the Tapster in the Red Raven Pub, Kain was able to find that Duncan would let him passed if he told him he worked for Ducket's Traders[4].

Further on in the level, Kain passed the outside of the Ducket's Traders Warehouse, which was decked out by warning signs; "Peddlers Stay Out" and "Keep Out Private Property". Shortly afterward Kain was able to climb over the fences an enter the Ducket's Traders Warehouse. Entering by an upper loading window, he passed through the Warehouse, nearly fully stocked with crates and was able to use the machinery to drop several crates through floors and enable him to reach the sewers underneath the building, which allowed him to move further along the Lower City's main road and bypass a Ward Gate [17].

The machinery in Ducket's Traders allowed Kain to drop crates on several occasions, creating holes through the floors. Kain could also use them to kill NPC workers -the same mechanism could be used in the Bonus mode to swap the places of one of the NPC's and Kain, so that the crate was dropped onto Kain, it does not harm him and he doesn't react to it[19].

The Outer Courtyard of Ducket's Traders

The Interior of the Ducket's Traders Warehouse

Anti-'Seraphan' graffiti in the Outer Courtyard

The City Power Werks was a building seen in Blood Omen 2, in Meridian's Lower City. It was occupied by the Sarafan and was presumably necessary for the production and distribution of Glyph magic. It was encountered in In Darkness We Gather.

The City Power Werks was a building that Kain found whilst exploring the Lower City. The outer fences of the building had "Keep Out Private Property" signs and prominently displayed Sarafan banners. As he passed by the fences to the power werks, Kain was spotted by a Glyph Guard, who summoned two Sarafan guards to battle Kain and set off an alarm which repeatedly summoned Sarafan Guards from inside the Power Werks, whilst it was active. Once he had climbed over the walls, Kain could float into the courtyard and (after battling the guards) deactivate the alarm with a switch outside the front door of the power werks.[17]

The Power Werks courtyard viewed from above

The City Reformatory was a building in the City of Meridian found in Chapter 3 of Blood Omen 2, just before Kain's first encounter with Sebastian.

The City Reformatory was a prison-like building in the Lower City. The building was made of worn looking dull grey stone and had several barred windows and a large, imposing door with a sign above it reading "City Reformatory" in Nosgothicletters.[17]

Blue Lady Curios was a shop featured in Blood Omen 2, in Meridian's Lower City. It was significant because in its basement it housed the headquarters of the Cabal.

Seeking Sanctuary throughout Chapter 3: The Lower City, Kain was told by the Cabal Contact news vendor that Sanctuary was hidden underneath the Blue Lady Curios shop in the Eastern part of the district.[5]

Kain could see the Blue Lady Curios shop shortly after he passed the City Reformatory, but was unable to reach it due to high fences. After encountering (and briefly pursuing) Sebastian, Kain was able to approach the shop, but had to retreat to the sewers to deactivate a set of Ward gates to allow him to enter the shop.[Blood Omen 2]

Inside the shop was typical of many of Meridian's businesses - few products are seen and there is only a fenced in counter for a shop assistant. (The name of the shop suggests it sold "bric-a-brac" type items.[22] Kain could pass by unmanned counter and proceed to the basement, Sanctuary.[Blood Omen 2][23]

Guillotine in a Lower City square 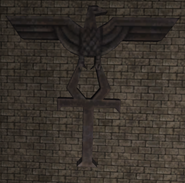 Poster for "Village of the Insane", playing at the Playhouse 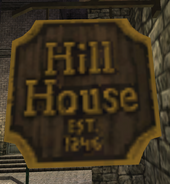 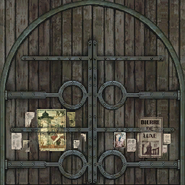