Long swords were first encountered by Raziel as he traveled into Nosgoth's early history and met his first Sarafan enemies, with the short-range Sarafan warrior swordsmen using them as weaponsTemplate:Ref-SR2-Prima. The swords notably had a Sarafan symbol at the hilt of the blade. 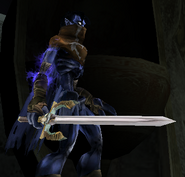 
Cite error: <ref> tags exist, but no <references/> tag was found
Retrieved from "https://legacyofkain.fandom.com/wiki/Long_swords_(Soul_Reaver_2)?oldid=79242"
Community content is available under CC-BY-SA unless otherwise noted.