Legacy of Kain Wiki
Register
Don't have an account?
Sign In
Advertisement
in: Pages with reference errors

"As I neared the Stronghold’s inner sanctum, a strange sensation crept over me – an indescribable feeling of displacement, a sense of vertigo as reality itself appeared to warp and bend around me. The disturbance seemed to emanate from the sanctuary’s furthest chapel. As I cautiously approached, the sense of dislocation intensified with each step."
―Raziel — Listen (file info)[src]

The Sanctuary, or Sanctuaries were a pair of identically named and similarly appearing significant chambers within the Sarafan Stronghold. First featured as a playable area of the Stronghold in Soul Reaver 2, a second 'successor' Sanctuary would subsequently be featured in Legacy of Kain: Defiance. Sanctuary appeared as a large cathedral-like room, with gated "inner sanctum" and "chapel" areas; which in various eras contained a mural depicting the death of Janos Audron, a chapel dedicated to the death of William the Just and the entailing First paradox, a statue depicting the final victory of Moebius and his mercenary army or a modest chapel arrangement containing the first fragment of the Balance Emblem. Sanctuary was notably the site of Raziel's confrontations with Rahab, Dumah and Turel in Nosgoth's early history and the Second paradox in the history preceding Blood Omen.

Sanctuary was a significant area within the Sarafan Stronghold, consistently presented as large cathedral-like chamber. The room was first featured in Soul Reaver 2 as Raziel explored the history preceding Blood Omen stronghold in A Reaver in Time. Entering the nave of the Sanctuary area, Raziel would comment on the effect Moebius's Staff had on the Wraith Blade, but more significantly, as Raziel entered the gated inner sanctum, his attention was drawn to the farthest chapel and the temporal distortions emanating from within. Inside the chapel was dedicated to the murder of William the Just at the hands of the fledgling Kain and the ensuing First paradox (as seen in Blood Omen: Legacy of Kain) that had acted as a catalyst to the crusades of Vampire hunters;

and featured a mural depicting the event as well as the tomb of William bearing his Soul Reaver blade, broken in the battle with Kain. Entering the chapel, Raziel discovered that the Soul Reaver itself was the cause of the distortions and utilizing the Reaver-convergence caused by the proximity of the Soul Reaver and Wraith blades, he was used to restore the broken Soul Reaver. In the process, the wraith blade was awakened as a "sentient parasite", which would turn its hunger upon Raziel, and unknowingly Raziel narrowly avoided triggering a paradox by using the conjoined blades to threaten Moebius, with only the revelation that he served the Elder God causing Raziel to stay his hand.

After leaving the stronghold, Raziel would return in A Fateful Meeting, again passing through the Sanctuary area on on the way to the Circle's gathering-room attempting to use the Time-streaming chambers| to travel to Nosgoth's early history. As Raziel passed through the inner sanctum area, he discovered Kain awaiting him in William's Chapel (having been alerted by the corpse of a guard drained of Blood). Kain carefully explained to Raziel the circumstances surrounding his murder of William, ultimately revealing how the presence of two Soul Reaver blades could cause a paradox "powerful enough to derail history" an appealing to Raziel's sense of Free will as the moment approached where history dictated that Raziel was destined to kill Kain. Taking advantage of the Reaver-convergence Raziel was able to ignite the Second paradox, sparing Kain and creating the Third timeline. When he reached the Time-streaming chambers, Raziel was tricked by Moebius and instead sent to the Era following Blood Omen.

Like many of the areas of the stronghold, the Sanctuary area was noticeably run-down and weathered in the Post-Blood Omen era and was over-run with Demons. Entering the inner sanctum area Raziel discovered a statue of Moebius holding aloft the severed head of Vorador - depicting the final victory of Moebius's army and extinction of the vampire race, and confirming that Raziel inhabited an era after the Collapse of the Pillars. Shortly after, Raziel encountered Moebius's "martyred spirit" in the Sanctuary Entrance chamber who would once again attempt to manipulate Raziel. When Raziel returned to Nosgoth's early history and re-entered the stronghold, he would be channeled into retrieving the Reaver and facing his former brethren in combat. When he reached the Sanctuary area, Raziel faced the Sarafan commanders Rahab and Dumah in the nave; and progressing into the inner sanctum he battled the Sarafan Turel.

Another identically named and similarly designed "Sanctuary" was featured as a playable location in Legacy of Kain: Defiance as Kain returned to the Sarafan stronghold in Nosgoth's early history seeking answers from Moebius, some years after the conclusion of Soul Reaver 2.[1] Kain would first enter the area in Infiltrate the Stronghold, discovering the first fragment of the Balance Emblem in the main chapel. Defeating a Sarafan ambush in the inner sanctum, Kain was able to retrieve the artefact, gaining the Balance Reaver enhancement which enabled him to dispel the Blessed barriers throughout the Stronghold and allowing him access to the Chapter House and the 'Staircase' leading to Moebius's chambers. The Sanctuary area would feature again in Pursue Moebius as Kain returned to Sanctuary and the ground levels of the stronghold via the Dungeon passage. After defeating another ambush in the nave, Kain was able to use the Falcon Insignia from Moebius's chambers to ascend to the upper level of the chapter house and return via the Chapter House Entrance to the upper level balconies of Sanctuary. Jumping between the balconies in the upper level of the nave, Kain was able to access the Relic Room alongside Sanctuary, allowing him to retrieve Malek's Shield, which ultimately opened his passage towards the Tower and his second confrontation with Moebius.

The large Sanctuary room could generally be divided into three areas, each separated from the others by gated barriers - the nave comprised the main area of Sanctuary, beyond this was the raised choir (also known as the inner sanctum or relic hall) and at the farthest end was the chapel. The same basic layout and divisions were maintained across all eras, despite many changes in scale, positioning and features between appearances.

When the room first appeared in the history preceding Blood Omen of Soul Reaver 2, the nave area was depicted as a large chamber with a high vaulted ceiling decorated with the banners of Vampire hunters. Alongside the main body of the nave ran two lower arcade aisles and at the head of the nave and aisles was the transept, which formed the 'arms' of the main cathedral area, topped at the crossing by a high spire-like tower. The main sanctuary entrance door was placed at the west of the nave with a small side entrance in the south and the gate continuing to the inner sanctum area at the east. The inner sanctum was a slightly raised choir area, accessed from the nave through a large gated entrance and by a small set of stairs. The inner sanctum was generally semi-circular in shape and dominated by the apse of sanctuary and its domed roof. The sanctum area itself extended beyond the borders of the apse onto several modest chapels arranged in a semi-circle around the outside of the apse, with the south-eastern most chapel notably containing a stained glass window depicting the death of Janos Audron and gaining of the Heart of Darkness by the Sarafan commanders. The floor of the inner sanctum also contained a noticeable Sarafan symbol mural, a southern side entrance which led through to the Chapter House and the final eastern gate at the end of Sanctuary, which led into the grandest of the chapel areas - William's chapel. William's chapel was the largest of the chapel areas extending beyond the apse and the only one that was gated. In this era, William's chapel was notably dedicated to the martyrdom of William the Just, whose death had inspired the crusades of Moebius's mercenary army and contained a stained glass window depicting Kain's murder of William and the First paradox. William's chapel also contained the sarcophagus of William himself, with the broken Soul Reaver once used by William placed on the tomb as a "holy relic". After Raziel's encounters in William's chapel, the Soul Reaver blade would be restored and the sarcophagus of William broken in two by the restored blade.

Much of the same layout and features were seen when Raziel visited the room in the Era following Blood Omen, though like much of the stronghold, it appeared heavily eroded and decaying with the banners of the mercenary army ripped down. A statue of Moebius bearing the severed head of Vorador had been added to the inner sanctum area as a memorial to the extinction of the vampire race and the 'Heart of Darkness' mural remained, though appearing somewhat darker and worn. The gates to William's Chapel were locked in this era and it could not be entered, but the room appeared to have changed little, with the mural and broken sarcophagus of William remaining in place albeit darkened and worn as well - the Soul Reaver had been removed. The Sanctuary area appeared much simpler in its appearance in Nosgoth's early history and contained none of the previously featured memorials, as the events depicted had only recently occurred or were yet to occur. All of the chapels featured only simple stained glass windows and William's Chapel, though once again locked, was empty.

The Sanctuary area seen in Defiance retained much of the same basic layout as before, though the room appeared much smaller and many of the features had been altered, with only the main entrance door appearing in the same position. The nave area was noticeably shorter the previously seen, with the side door missing and the formerly high arched aisles now each having a second tier balcony which provided access to the nearby relic room. The raised inner sanctum area appeared to have been extended and now encompassed a combined transept and apse area, topped by a dome with an open oculus window. Doors had been ended at the ends of the transept and the sanctums Sarafan symbol remained in the same position (though it appeared to move because the addition of the transept to the inner sanctum area). The chapels that had been seen in Soul Reaver 2 were now much shallower, being little more than alcoves with even simpler stained glass than previously. Due to scaling differences, the chapels were much closer to the center of the inner sanctum, with only the main chapel extending beyond the boundaries of the apse and two of the former chapels (including the 'Heart of Darkness' chapel) had been covered and instead had small watchtowers in front of them. In this era, the gate between the later William's chapel and the inner sanctum was only closed once, during a Sarafan ambush as Kain discovered the Balance Emblem hub within; and once defeated Kain could access the chapel freely afterwards. The chapel had remained in its prior position and was again larger than the others (although still smaller than its prior incarnation), but besides the balance emblem and its plinth the chapel was again empty, with only another simplified stained glass window. As with other recurring Stronghold areas seen in Defiance, Sanctuary gains additional minor Sarafan icons and more luxurious gold trimmings in its reappearance, presumably reflecting the supposed opulence and wealth-hoarding tendencies of the later Sarafan history.[2] 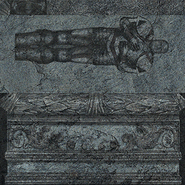 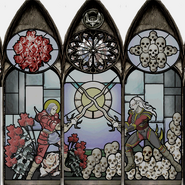 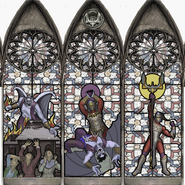 Moebius's statue in the choir

Moebius's statue in the choir

The roof of Sanctuary over the Cloister in Soul Reaver 2 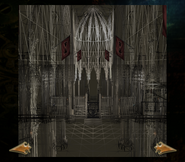 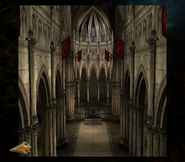 This page is about The "Sanctuary" Cathedral area within the Sarafan Stronghold. For other uses, see Sanctuary (disambiguation).