The Pinnacle is seen briefly in the background of Raziel 's meeting with The Council in the Soul Reaver opening video and is featured in the final Chronoplast Vision and several concept arts.

Though the Pinnacle of the Silenced Cathedral is not visited in Soul Reaver, it was planned to feature heavily in the conclusion to the Original Soul Reaver Storyline . Raziel would have reached the Pinnacle - apparently by gliding from Kain's Mountain Retreat - and would have continued to use the Amplified Reaver to battle off a 'swarm' of desperate vampires and open the sounding pipes, killing all of Nosgoth's Vampires as reconstructed in this video.

High quality images of the Pinnacle exist which suggest that the final section may have been an FMV and non-playable. The final Chronoplast Vision shows part of the aftermath of opening of the sounding pipes, with Raziel looking down at Nosgoth - Soul Reaver 2 would re-interpret the balcony as part of Janos Audron's Aerie .

The alpha version of Legacy of Kain: Soul Reaver exposed in 2020 contained some evidence of the pinnacle with several further rooms accessible from a passage behind Zephon's head. In early builds this contained a narrow curving corridor spiralling upward to a large open untextured space appearing to be at the roof of the Cathedral; while later builds featured a more expansive ledge-filled ascending chamber instead. The area from the Chronoplast Visions is not part of the areas seen and appears to bear textures associated with Turel's clan territory - suggesting it was a mockup created purely for the purpose of the visions.

It's unclear how these would be reconciled with the previously available information. The presence of a Glyph X style render would seem to suggest a high quality cutscene finale, while the presence of in-game areas would suggest they were either playable or an in-game cutscene. Similarly while it was indicated Raziel would glide to the upper Cathedral as the top was blocked off from below, in the alphas it can accessed through the regular Cathedral. Other parts of the Cathedral contain fragments of unused puzzles requiring late game abilities and often involving air-flow regulation and pipes - perhaps suggesting that a return to the Cathedral was intended to unblock the pipes before progressing to the pinnacle. Ultimately it seems that multiple approaches to depicting the area were attempted before the location was removed entirely.

promotional render of the pinnacle of the Silenced Cathedral

The Pinnacle of the Silenced Cathedral (background, right) as it appears in the Legacy of Kain: Soul Reaver intro 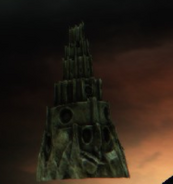 Retrieved from "https://legacyofkain.fandom.com/wiki/Legacy_of_Kain_Wiki:Pinnacle_of_the_Silenced_Cathedral?oldid=190764"
Community content is available under CC-BY-SA unless otherwise noted.