The Lake of the Dead 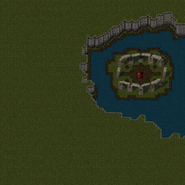 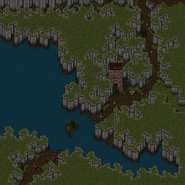 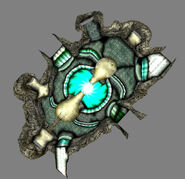 ... and the events of Soul Reaver

"I, Raziel, was to suffer the fate of traitors and weaklings - to burn forever in the bowels of the Lake of the Dead."
―Raziel[src]

The Lake of the Dead was a large lake in central Nosgoth that lay south of the Oracle's Cave and Malek's Bastion, north of the Pillars of Nosgoth and the Sanctuary of the Clans, and on the northern edge of the Termogent Forest. The Lake was featured in Blood Omen: Legacy of Kain and Soul Reaver where it was seen in two different eras - the latter of which showed its erosion and collapse into a whirlpool known as the Abyss.

The lake was notable in earlier eras for being the location of the Mist Form Dungeon where Kain gained the Mist Form ability as well as the having an island which contained a teleporter to the secret-filled Lost City. In later eras the lake was used as an execution ground for Vampires and was the site of Raziel's execution and ultimately the womb of his revival as a wraith.

The Lake of the Dead was a major body of water in central Nosgoth that served as a landmark and a playable location in both Blood Omen: Legacy of Kain and Legacy of Kain: Soul Reaver.[Blood Omen][Soul Reaver]

The lake was first seen in the events of Blood Omen during the events of Blood Omen as the fledgling vampire Kain crossed it in the chapter Vorador's Mansion as he made his way to the Termogent Forest in search of the refuge of the vampire Vorador. Reaching the northern banks of the lake, Kain discovered the Mist Form Dungeon that held the Mist Form ability and enabled him to float over water and swamp terrain unharmed. Using this ability he was able to cross the lake and the nearby swamp on his way to Vorador's Mansion. Kain could also explore the lake further travelling northwest to its apex where an island housed a megalith circle and a teleporter which led to The Lost City - an optional area containing most of the games Secrets. [Blood Omen][Blood Omen/6]

By the events of Soul Reaver in the events of Soul Reaver A millennium and a half after the events of Blood Omen, the lake had changed drastically and had become home to a massive swirling whirlpool known as the Abyss, with the island worn away to little more than an execution platform used by the Vampire Clans of Kain's empire to punish traitors and weaklings. In this capacity it was seen in the opening of Soul Reaver as Raziel was executed from here, supposedly for evolving before Kain, with the sentence carried out by his brothers Turel and Dumah on Kain's order.[Soul Reaver][Soul Reaver/1]

The Abyss was treated as something of a 'womb' of Raziel's rebirth as he was resurrected as a Soul devouring wraith by the Elder God in the underworld beneath the Abyss and sent to settle his vendetta against Kain, with centuries passing since his execution. Raziel returned to the surface and after passing the Sanctuary of the Clans, Raziel made his way back to the cliffs of the Abyss and found the whirlpool was largely unchanged in the passing years and he was able to use it as a landmark of sorts to get his bearings in the new Nosgoth, before travelling on to the territory of his clan.[Soul Reaver][Soul Reaver/2]

The Lake and the Abyss then served as something of an initial hub area, allowing Raziel access to locations such as Raziel's Clan Territory, the Underworld, the Sanctuary of the Clans and the Human Citadel - with areas such as the Silenced Cathedral and the hub for the Ruined City of the Dumahim and Oracle's Cave also positioned nearby. At any time Raziel could also jump down the abyss to the underworld, returning him to the Elder's chamber in the Underworld.[Soul Reaver]

When seen in the events of Blood Omen in Blood Omen: Legacy of Kain in the chapter Vorador's Mansion the Lake of the Dead was a fairly inconspicuous body of water on the trail between the Oracle's Cave and the Termogent Forest. The trail led southward from the icy northern passes to a set of grassy canyons with a small amount of Trees and Spike plants. A fork in the trail led eastward to a clearing with a Bat beacons at the edge of a heavily forested region, while the main trail turned southwest, passing the nearby Mist Form Dungeon which held the Mist Form and a vista point from which Kain could view the Termogent Forest and the roof of Vorador's Mansion - and optionally use Bat Form to fly there.[Blood Omen][Blood Omen/6]

The trail continued southwest to the lake itself, which effectively formed a natural barrier preventing Kain from reaching the Termogent Forest without taking damage and and forcing him to use Mist Form. At the time the Lake consisted of something of a 'Q'-shape with Kain arriving at the narrowest stretch in the southeast and crossing with the aid of a small muddy island containing a tree and a spike plant to the far bank where a pair of Gaseous flowers flanked the trail heading southwest to the Termogent Forest.[Blood Omen][Blood Omen/6]

The main body of the lake to the northwest was hemmed in by a set of cliffs and housed a large island at the center with a megalith stone circle and a teleporter in the middle which led to the outskirts of the Lost City.[Blood Omen][Blood Omen/6]

When seen in the events of Legacy of Kain: Soul Reaver at least 1500 years later, the lake had heavily eroded becoming the massive whirlpool of the Abyss. Most of the lake had dried and the water level had dropped significantly, leaving only the northwestern area of the lake, and this was hemmed in by tall cliffs. At the center of the area formerly covered by the island a massive sinkhole had developed draining all of the water of the lake, which was fed by the steep waterfalls around its outer edge and a number of smaller waterfalls and streams coming over the cliffs. The island at the center was now featureless and was broken into two smaller sections either side of the sinkhole, each accessible from the outer edges by wooden bridges which spanned from breaches in the cliffs.[Soul Reaver][Soul Reaver/1][Soul Reaver/2]

Two versions of the Abyss were seen in Soul Reaver, with one seen in the rendered FMV 'Vampire Scourge' introduction cutscene and a slightly different version appearing in gameplay and gameplay-related cutscenes from 'Underworld' onward. It is unclear if the differences between the two were the result of behind-the-scenes artistic decisions taken by GlyphX and Crystal Dynamics or were in-universe and the result of several centuries of further erosion after Raziel's execution.[Soul Reaver][Soul Reaver/1][Soul Reaver/2]

The Abyss in the Soul Reaver intro FMV

The model of the Abyss area seen in gameplay

The GlyphX FMV version of the Abyss appeared to be on a much grander scale, with islands, bridges, waterfalls and background all appearing to be much larger than the later interpretation. The pillars that remained of the islands appeared to be more rugged and rocky, as were the cliffs which were given a brown hue. The amount of water flowing into the sinkhole was much greater than the later version, giving the impression of a complicated swirling cascade of water. The background was also more detailed with a number of landmarks such as the pinnacle of the Silenced Cathedral and the Smokestack visible over the top of the cliffs. The water itself also seemed different, with more watery effects and a greenish hue to the liquid.[Soul Reaver][Soul Reaver/1][Soul Reaver/2]

Comparatively, the Abyss seen in gameplay seemed much smaller in scale, with the islands now close enough to be jumped across. Both bridges had fallen - although these could also be jumped across - and detailed rocky textures now seemed much smoother and dulled to greys rather than browns. The water level appeared to have receded even further, with less turbulent and more orderly, flatter water flow - this in turn meant that the edge of the bowl was more defined by the rocks underneath. The amount of water was still notable at the sinkhole which continued the swirling cascade seen before, although it was perhaps calmer, with a more blueish hue than had been seen previously. The same waterfalls and streams feeding the whirlpool were seen, although they too were notably calmer and less turbulent.[Soul Reaver][Soul Reaver/1][Soul Reaver/2]

Soul Reaver Beta versions of the Lake of the Dead/Abyss area are largely identical to the retail version though they do demonstrate a number of minor touches that were added later in the design process or changed completely. For example, The beta versions lack the burning torches and the clan insignia flags on the walls, as well as the 'fence posts' at the end of the bridges. the Ruined City of the Dumahim bridge is also changed with the far section completely missing and the near section raised to a higher angle with added collision detection so that it can be grabbed. Most of the area is also given an added green tint in the retail version (presumably using fog settings) that is not present in earlier versions, which makes the water and other textures appear grimier and dirtier. One of the earlier designs for Planar portals can also be found in the area.[Soul Reaver][1]

Perhaps the most noticeable change is that in the earlier versions the cutscene regarding the cataclysms in Kain's empire occurs as Raziel enters the Abyss area - where it appears at the Sanctuary of the Clans in the retail version. After this cutscene, the scene where Raziel regards the Abyss itself plays as Raziel walks to the edge of the whirlpool, whereas in the retail version that scene plays as soon as Raziel enters the area and walks across the first bridge.[Soul Reaver][1]

As the site of Raziel's execution, the Lake of the Dead is mentioned several times in the background materials to multiplayer spin-off Nosgoth, where the Kain's execution of Raziel forms the basis of Kain's disappearance and the beginnings of the Vampire Civil War.[NOS][2]