Kain's Mountain Sanctuary also known as Kain's Mountain Retreat was one of the final levels originally planned for Soul Reaver that was removed due to deadlines.

In the original storyline, Raziel would have been able to reach Kain 's retreat by using an updraft from Turel's smokestack to glide into the mountains and up to the secluded retreat. Here, armed with the Ariel Reaver, he would have had his final battle with Kain, finally killing him and taking his Soul into the Reaver to form the Amplified Reaver(also known as the Kain Reaver.)He would have been able to then use the height of the mountain to glide to the Pinnacle of the Silenced Cathedral. 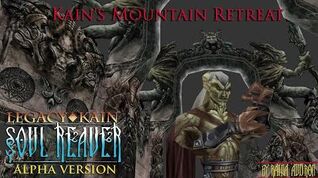 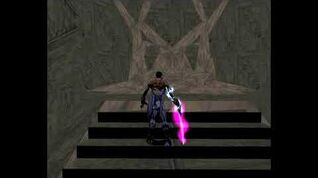 "This smokestack will permit your ascent to the summit of Kain's mountain sanctuary."
―The Elder God — Listen (file info)[src]

Kain's mountain retreat is available in some early alpha and beta builds of the game where it appears in Debug menus as a separate area not linked to any of the others in the game - perhaps implying that it was to be reached by cutscene or the areas between the retreat and the rest of the world are incomplete. The final location of the retreat is thus still unknown however the revised positioning of Turel's Clan Territory and its relation to the retreat suggests that the retreat may have been nearby and likely positions include the cliffs around the sides of the final frozen clearing.

The retreat itself consists of three rooms - a wide sweeping arc corridor apparently cut off at each end, a small circular room and a larger untextured domed room with a thorne - suggesting it was intended as the site of the final boss battle, although Kain is absent an no battle can be engaged.

The imagery and architecture of the area is striking and grandiose, with some apparently adapted into the scheme of the Chronoplast after the removal of the retreat. One of the early screenshots of Raziel gaining an unidentified ability was previously identified as a potential early incarnation of the Chronoplast but instead takes place in the second room of the retreat, potentially suggesting an ability of some kind was to be gained there.

The exact placing of Kain's Mountain Retreat within Nosgoth is unsure, some sources place the Retreat to the East of the Abyss, between the (also removed) the Smokestack and Pinnacle of the Silenced Cathedral, (although unlike these locations Kain's Sanctuary is not seen in the opening video); others consider the Sanctuary of the Clans and Sarafan Tomb to be closer to Kain's true interests and place his territory between the Drowned Abbey and the Sunlight Glyph Altar, so his territory covers these locations.

The only known footage of Kain's Mountain Retreat comes from the visions in the Chronoplast where Kain and Raziel face each other, curiously Raziel is armed only with the Material Reaver here, not the Ariel Reaver - this scene would eventually become part of the Legacy of Kain: Defiance storyline.

Concept art from Soul Reaver depicts an apparently similar mountain-top structure, however this has been confirmed to be an early version of the Sanctuary of the Clans.

Community content is available under CC-BY-SA unless otherwise noted.