Legacy of Kain Wiki
Register
Don't have an account?
Sign In
Advertisement
in: Blood Omen, Browse, Defiance,
and 6 more

Locations article
The exterior of Kain's Mausoleum in Defiance.

"I awoke to the pain of a new existence, in a dank womb of darkness and decay."
―Kain — Listen (file info)[src]

Kain's Mausoleum is the crypt where Kain was buried after his human death in the events of Blood Omen, and the place he awoke as a vampire shortly afterward. Situated within the Cemetery in southwestern Nosgoth, it appears as a playable location in Blood Omen: Legacy of Kain and Legacy of Kain: Defiance.

When Kain was murdered by brigands in the opening chapters of Blood Omen and was resurrected as a Vampire by Mortanius, Kain awoke in his family mausoleum four days later. The mausoleum served as something of the first 'dungeon' area and was where Kain found many of his most frequently used items, including the Iron Sword, Iron Armor and the Sanctuary Spell. He also gained his first Blood Vial, Rune triangle and Heart of Darkness relics. The area was also where Kain found his first Save altar.[Blood Omen][Blood Omen/1][Blood Omen/2]

Through the use of the Sanctuary Spell, Kain could often return to his mausoleum, gaining a small health boost when he did - it was also well-equipped with human sacrifices, and relative safety (though there were low level enemies, like gravediggers and Skeletons.). When he left the Mausoleum he found himself in the Cemetery and recognized his first vampiric vulnerabilities - to sunlight and rain. After passing through The Cemetery and several other Mausoleums, he was able to begin his journey back to Ziegsturhl.[Blood Omen][Blood Omen/2]

Kain's Mausoleum returned in Legacy of Kain: Defiance, where Raziel emerged from Elder's Lair into the Cemetery. Unknowingly Raziel initially passed through the structure shortly after his arrival in Find the Path to the Pillars and was able to use his first Burial site in the entrance chamber to return to the Material Realm but could not progress any further due to the presence of Guardian gargoyles. After gaining the Dark Reaver from a Dark Forge, Raziel returned to the mausoleum and was able to bypass the gargoyles and discover that he had in fact entered Kain's Mausoleum, apparently shortly after the younger Kain's exit in Blood Omen. Raziel investigated Kain's crypt and recovered Kain's Family Crest, using it to escape the tomb and ultimately reach a high vista that enabled him to breach the warp gate to the Light Forge.[Defiance][Defiance/4]

Kain's Mausoleum undergoes some radical changes between its Blood Omen and Defiance incarnations and with both seen in the events of Blood Omen the changes are almost certainly due to artistic interpretation.[Blood Omen][Defiance][1]

At a basic level the color scheme, environment and layout has changed between titles. With the area seen in Blood Omen featuring more artistic pillars and wall flourishes, and generally a much more angular, darker feel than the more rounded and traditional cemetery feel of Defiance. The map of the Blood Omen area is treated as a single map tile and features ten distinct rooms, with the Defiance area treating them as four different sub-areas of the main Cemetery level, with a number of inter-connecting corridors that could comprise of upto seven rooms. Although though some could be considered to represent the same rooms, each is radically different from its predecessor.[Blood Omen][Blood Omen/2][Defiance][Defiance/4][2]

Although the areas change radically between games, the Mausoleum in Defiance is filled with small nods to the original Blood Omen: Kain's grave appears in similar fashion to its appearance in Blood Omen, The painting of human Kain grows small fangs in the Spectral Realm and is decorated with Furthark runes which translate as "Here Lies Kain". Further down the corridor, there is also a grate which appears to have been broken, presumably by the younger Kain's escape, and a large bust of the Human Kain.[Blood Omen][Blood Omen/2][Defiance][Defiance/4][3]

A notable overarching difference between the two areas comes from the orientation of the Cemetery itself which is aligned north-south in Blood Omen, but is changed to a more diagonal tilt in Defiance. The Mausoleum still appears to be located in roughly the same position within the cemetery - the northwestern most building in the cemetery - but the building and all its rooms appear to have rotated.[Blood Omen][Blood Omen/2][Defiance][Defiance/4][2]

"Against all odds, I had stumbled into Kain's own mausoleum. This seemed an unlikely coincidence..."
―Raziel[src] 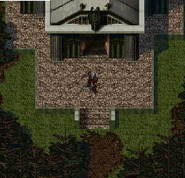 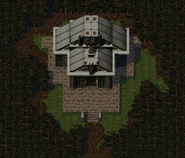