The 'Gunship' is a unique enemy (unnamed in game) that is featured in Blood Omen 2. It is encountered only once, patrolling part of the waters in Chapter 10:the Wharves, particularly defending those around the Southern Docks, where ships were headed to the Hylden City .

The ship behaves similarly to an enemy character, patrolling the last part of the Wharves and attacking Kain on sight. When Kain strayed too close to the Gunship, the turret on the ship would lock onto Kain and shoot 'fire arrows' at him, at roughly double the rate of the Sarafan Archers[Blood Omen 2].

The Ship patrolled only the last section of the level, constantly circling one of the last 'islands' to catch intruders. Kain had no means to destroy the ship and it could not be attacked in any fashion.[1] 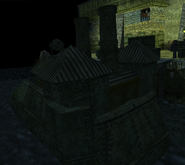