Legacy of Kain Wiki
Register
Don't have an account?
Sign In
Advertisement
in: Mythology, Mythology/Guardians, Blood Omen,
and 2 more

The Guardian of the Mind

The Guardian of the Mind

The Mind Guardian was the individual born to represent, serve, and protect the Pillar of the Mind - one of the Pillars of Nosgoth - and was ultimately responsible for the metaphyisalc shpere of the Mind within Nosgoth. All Guardians belonged to the oligarchy of sorcerers known as the Circle of Nine.

The Mind Guardians were the guardians of the Pillar of the Mind. Their abilities lay in psychological properties such as thoughts and emotions which they were apparently sensitive to in others. They also had many exotic mental abilities such as Telepathy Telekinesis and the ability to create illusions.

As with other guardians few of their particular abilities or skills are directly named or identified, however some sources describing the powers of individual guardians give clues that may apply to other Mind Guardians.

Nupraptor is described in game as using " tricks of the mind, telepathy and telekinesis." and his boss battle had him using Spike pits and illusionary spheres to combat Kain. Silicon Knights description of Nupraptor includes the following notes on his abilities:

A magician of phenomenal mental and psychic ability, Nupraptor is hypersensitive to peoples' emotions and thoughts. This constant exposure has made him extremely unstable - prone to rash action and sometimes unpredictable and illogical decision making. He is a passionate man, however, and very loyal to those who are special to him...He vows vengeance upon Mortanius and the fates that have caused this event, and turns his powerful magic to bear on the other members of the Circle of Nine. All across Nosgoth, the minds of the sensitive and intellectual are blasted by relentless waves of hatred. There is no stopping the assault. When the enchantment ends, the entire Circle is quite insane, some raving like madmen, others maliciously in control of their actions
―[1]

Later in the series another Mind Guardian the Original Guardian of the Mind is encountered by Raziel. In his bottle he used similar illusions such as the Mental Simulacrum ability along with teleportation and projectile attacks. The official strategy guide offered the following on his powers:

Once reigning over the limitless power of thought, consciousness and emotion, the original Vampire Guardian of Mind now rests as but a mere specter within the Vampire Citadel
― Legacy of Kain: Defiance: Prima's Official Strategy Guide

Three mind guardians have been observed in the series, of these Nupraptor the Mentalist is the only one who is named, and it is he whose mental prowess and psychic powers ultimately lead to the Corruption of the Pillars, through an attempted psychic attack on Mortanius (though this may also be characterised as a "descent into madness") which effects all of the circle, the pillars and eventually Nosgoth itself.

Two of his predecessors have also been seen. The original Vampire Mind Guardian, whose soul was taken along with the original Vampire Dimension Guardian, to forge the Reaver with elemental Air in Legacy of Kain: Defiance (This vampire mind guardian, much like Nupraptor himself, attacked by utilising illusions).

Finally a Mind Guardian is known to have been murdered by Vorador at the Slaughter of the Circle in Nosgoth's early history. His murder was not depicted during Blood Omen: Legacy of Kain, but it is depicted in the Circle's gathering-room in the Pre- and Post-Blood Omen eras in Soul Reaver 2, along with his apprentice the Martyred Guardian of Dimension 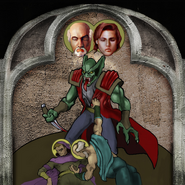 The depiction of the martyred Mind Guardian (elder) 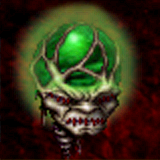