Legacy of Kain Wiki
Register
Don't have an account?
Sign In
Advertisement
in: Mythology, Mythology/Guardians, Browse,
and 2 more

The Guardian of States

The Guardian of States

The States Guardian was the individual born to represent, serve, and protect the Pillar of States, one of the Pillars of Nosgoth. All Guardians belonged to the oligarchy of sorcerers known as the Circle of Nine.

The State Guardian is able to shape and change the states of matter at will,as well as can warp the states to make them different.

As with other guardians few of their particular abilities or skills are directly named or identified, however some sources describing the powers of individual guardians give clues that may apply to other States Guardians.

Anarcrothe's background in alchemy is hinted in descriptions of his pillar token - Anarcrothe's Alchemical Scales:

Anarcrothe’s magic was contained within the metal of the scales, and would eventually be released back into the pillar from whence it came.
―[Blood Omen/10]
The scales of Anarcrothe, used to measure out unholy substances in alchemy.
―[Blood Omen/10]

Silicon Knights description of Anarcothe meanwhile includes the following notes on his abilities:

Anarcrothe the Alchemist is a tinkerer. He fools around with chemicals, alien substances and strange machinery. He concocts, explores, experiments, and dabbles with forces he only partially understands. Long ago, he became scarred in an accident resulting in one of his more ambitious experiments. The left side of his face was burned away by acidic energies, melding skin and bone in an unsightly writhing tangle. This mutilation he keeps hidden beneath the hood of his robes, so that only the unscarred side of his face is visible. He wears robes of dark, imperial purple, embroidered with the arcane symbology of his craft.
―[1]

In the course of Blood Omen Anacrothe is seen using only a single attack - a green viscous projectile which he uses against Mortanius in their battle. The projectile strikes and results in something of a wavy effect but appears to ultimately fail.

Later in the series another States Guardian the Original Guardian of States is encountered by Raziel. In his battle he used two special attacks both of which implied state changes. Vapor Ball was a simple projectile attack whose name suggested a change of states, however his main attack was Quiescent Transformation which suggested several state changes:

This spell turns the Guardian into mist, making him invulnerable to attack. In this form he has a Dash Attack that if it hits will envelop you and hold you in place. Right before the dash hits, the Guardian will shift back into a solid form for a moment. This gives you the chance to bat the attack away, if you do not have time to dodge it.
―Legacy of Kain: Defiance: Prima's Official Strategy Guide

The official strategy guide also offered the following on his general powers:

The shapes and forms of all physical matter were once presided over by the original Vampire Guardian of States who now rests within a tomb within the Vampire Citadel
―Legacy of Kain: Defiance: Prima's Official Strategy Guide

Ultimately Daniel Cabuco described the powers of the States guardians on his forums as "Ability to transition between states like solid, gaseous and liquid. Can warp the states to make them different (Earth to liquid becomes lava, etc.)"[2] 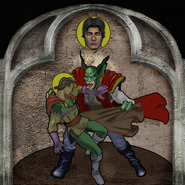 The Martyred States Guardian as depicted in Soul Reaver 2