Legacy of Kain Wiki
Register
Don't have an account?
Sign In
Advertisement
in: Mythology, Mythology/Guardians, Browse,
and 2 more

The Guardian of Nature

The Guardian of Nature

The Nature Guardian was the individual born to represent, serve, and protect the Pillar of Nature, one of the Pillars of Nosgoth. All Guardians belonged to the oligarchy of sorcerers known as the Circle of Nine.

The nature guardian was in control of the elements, the weather and overall aspects of life, and would have vast magical powers at his disposal.

As with other guardians few of their particular abilities or skills are directly named or identified, however some sources describing the powers of individual guardians give clues that may apply to other Nature Guardians.

Silicon Knights description of Bane included the following notes on his abilities:

Bane is a wizard of Nature. He manipulates the behavior of life and the elements. Through his magic he can change the nature of life itself, animating plants and influencing animals, creating new and weird life forms for his own purposes. The weather itself is at his behest. Bane is dressed in the trappings of a priest of nature - somewhat druidic in essence. Animal skins and hides clothe his body, a deer skull functions as a hat.
―[1]

Later in the series another Nature Guardian the Original Guardian of Nature is encountered by Raziel. In his battle he used a projectile attack Fury of Terra, as well as a summoing attack Nature's Grip which summoned Tentacles to attack Raziel. The official strategy guide offered the following on his powers:

Once governing the plants, animals and all forms of natural life in Nosgoth, this specter served as the original Vampire Guardian of Nature.
― Legacy of Kain: Defiance: Prima's Official Strategy Guide

Ultimately Daniel Cabuco described the powers of the nature guardians on his forums as "Ability to commune and influence Nature, summon natural phenomenon for combat. Can warp creatures growth and abilities."[2] 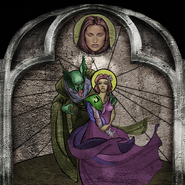 The martyred Nature Guardian as depicted in Soul Reaver 2