Legacy of Kain Wiki
Register
Don't have an account?
Sign In
Advertisement
in: Mythology, Mythology/Guardians, Browse,
and 3 more

The Guardian of Balance

The Guardian of Balance

The Balance Guardian was the individual born to represent, serve, and protect the Pillar of Balance, one of the Pillars of Nosgoth. All Guardians belonged to the oligarchy of sorcerers known as the Circle of Nine.

These incarnations of Balance influenced the regulation of other magic in Nosgoth, and governed their peers.[DEF-Fankit] They were responsible for pruning corrupt forces within the Circle. Guardians of Balance could draw upon their fellow members' abilities, or build up their own, to destroy other Guardians should they go astray.

"As Ariel dies, I am being born to take her place as Balance Guardian.
Such is my destiny."
―Kain — Listen (file info)[src]

There have been four Balance Guardians seen in the games. First one was the original Ancient vampire Balance Guardian as seen in the murals, then he was replaced by a human, possibly the same one which Vorador kills in the opening cinematic of Blood Omen, then by Ariel who was succeeded by Kain. 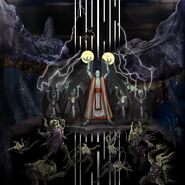 The Martyred Balance Guardian as she appears in Blood Omen

The spirit of Ariel 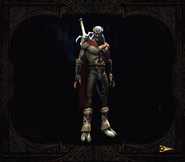 The Scion of Balance, Kain

Amy Hennig and Carol Wolf's script for Defiance's The Transformation of the Reaver scene directed that "we see first Ariel manifest, transformed into her perfect state when she is summoned, and then one spirit after another join and unite with her. The player may notice, we do not see Kain's spirit."[Defiance/Cut content] However, only Ariel's spirit is distinguishable in the final product, with the other Balance Guardians manifesting as multicolored soul energy.[Defiance/12] The predecessor Balance Guardians do appear in some fashion however, with the textures of the Spirit Reaver made up of a number of faces - presumably representing the previous guardians.[Defiance]