A Glyph Magic 'Box' with Glyph 'Switch' in the Slums

Glyph Magic, also known as Glyph Energy or simply Glyphs, was the magic energy used by the Hylden in the Era following Blood Omen of the Fourth timeline, it was seen in Blood Omen 2.

Glyph magic was first brought to Nosgoth in the Era following Blood Omen, in war between the (Hylden backed) Sarafan and Kain's Vampire Army. In the battle of Meridian, The Sarafan Lord wielded this "new kind of magic, deadly to [vampires]"[1] and it was instrumental in the Sarafan victory. As the Sarafan conquered Nosgoth, Glyph magic became an important tool in hunting down the Nosgoth's vampire population[2] and It was notably seen as part of magical (Vampire detecting) armor worn by Glyph Guards and Glyph Knights.[3]

With their rule over Nosgoth established through the Sarafan Order, the Hylden continued in their plans to complete the Device and slowly, in the guise of the glyph wrights, they created and maintained a Glyph Energy Network, which flowed throughout Meridian (if not all Nosgoth).[4][5][6] This network provided power for a variety of applications - It was used as a light source, to lock doors, to operate machinery, and was even used to make a sort of magical bomb. Glyph magic powered much of the advanced technology seen in Meridian, including Ward Gate[7](though steam powered machinery was also present in Meridian) and it appeared to have driven somewhat of an 'Industrial Revolution' within Meridian, providing some benfits to Meridian's citizens, which likely won the Sarafan support among the Humans.[8][9] Glyph energy was used much like electricity is in the real world (although it travelled much slower through 'pipes').[10] Though Glyph magic provided heat and light for much of Meridian, it also had a darker purpose; the Device could focus the deadly thoughts of the Mass onto the Glyph Magic network and use it to kill all the non-Hylden life in Nosgoth.[11]

When Kain returned in Blood Omen 2, he was initially taught about the Glyph magic and energy by Umah in her tutorial in Chapter 1:the Slums.[12] Kain would utilise the energy numerous times to complete puzzles throughout the game. When Kain found the Builder in the Eternal Prison, seeking a way to destroy the Device; The Builder explained to him that the Device had never been completed because it required a network to transmit the thoughts of the Mass onto.[11] Realising that the Glyphs installed by the Sarafan had completed the network Kain set off to destroy the Device and by poisoning the Mass using the Builder's Blood Kain was able to nullify the Device[Blood Omen 2].

After he had destroyed the Device, the Glyph Energy network was still shown to function in Chapter 10:the Wharves. In Chapter 11, The Hylden City lacked any of the previous established 'machinery' associated with the Glyph magic network (it was unlikely to have been included in the network anyway) but it did feature the usage of a kind of raw 'Glyph energy' with several instances of green glowing 'liquid' and green glowing symbols and devices apparently providing power[Blood Omen 2]. 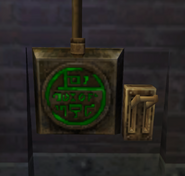 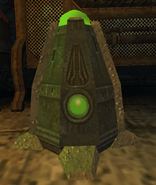 A set of Glyph Generators

one design of Glyph Valve