The Force Glyph altar was an optional location in Legacy of Kain: Soul Reaver. It was one of several glyph altars Raziel could access in Nosgoth in the Soul Reaver era.

The altar was reached from an underwater tunnel within a lake in the Necropolis and contained a distinctive stone face effigy. Activation of the altar allowed Raziel to gain the Force Glyph.

The Force Glyph like other glyphs in Legacy of Kain: Soul Reaver was an entirely optional enhancement and it was not necessary to visit the altar as part of the story of the game. The Force Glyph altar was the earliest glyph altar which Raziel had the potential to discover and activate and he could access it as soon as he had devoured Melchiah's soul and obtained the phasing through gates ability.[Soul Reaver][Soul Reaver/5][Soul Reaver/Force]

The altar was found underwater in the small cove area of the Necropolis behind one of a pair of passages blocked by grates and could be reached by going through an underwater passage from the lake or by dropping down from the banks of the cove. One of the grates blocked off a recess with a health power-up while the other led directly up a ramp to a dry, isolated chamber – the Force Glyph altar.[Soul Reaver][Soul Reaver/Force]

To obtain the glyph, Raziel was obliged to solve a simple puzzle. The altar contained three obelisk pillars, arranged in such a fashion that toppling them would cause them to converge at the room's center, forming the Force Glyph symbol. By shoving the pillars to the floor Raziel activated the statue, causing its eyelids to open. Beams of pure, white light radiated from its eyes to the heart of the room and the Force Glyph promptly emerged from above, ready to be claimed.[Soul Reaver][Soul Reaver/Force]

The Force Glyph altar branched off from an underwater passage beneath the cove area of the Necropolis which was blocked by a gate. Beyond the gate was a long hallway which rose above the waterline and surfaced at a round room made out of white stone with ribbed walls containing ornate patterns. At the back wall was a distinctive relief of a face with the eyes sewn shut - representing former Mind guardian Nupraptor. The face was flanked by two Force symbols and three obelisks were placed in the middle of the room in a triangular arrangement around a brain pattern on the floor - with each obelisk bearing bearing a portion of the force symbol atop them. To complete the puzzle Raziel needed to push down all the pillars, toppling them so their symbols matched up to create a full force symbol on the brain design. This is turn activated the altar, causing the eyes of the large stone face to open and allowing Raziel to gain the Force Glyph.[Soul Reaver][Soul Reaver/Force]

In the Soul Reaver alphas, the Force Glyph altar is positioned in a different location with the glyph appearing to be gained much later in the game. Rather than being found beneath the cove in the Necropolis, the Force glyph altar is instead positioned in a passage at the end of the boat area of the Drowned Abbey. The altar is notably underwater meaning that projectiles are required to complete the puzzle - this functionality is missing from the retail version where projectiles are ineffective.[1][2][3][Soul Reaver][Soul Reaver/Force]

The other five obtainable glyphs in Legacy of Kain: Soul Reaver were intended to be represented by a glyph altar and an accompanying Reaver forge - there the Wraith Blade could be imbued with elemental powers, such as Sound, Stone, Sunlight, and Water. The Force Glyph is the sole exception; no sources support the idea that a Force Reaver was ever planned. Therefore, the Force Glyph altar was the only Force-associated location designed for the game.[4][5]

The "brain" texture from the floor of the altar (SR1). 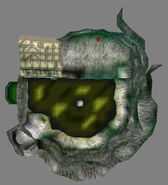 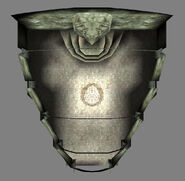