Fire Demons, also known as Red Demons or Red Fire Demons were a Demon-variant enemy class featured in Legacy of Kain: Defiance and the latest Fire-affiliated demon variant enemy to be seen after several similar predecessors. The Fire demons were powerful creatures originating in the Demon Realm who were able to cross over to the Spectral and Material Realms through the weakening of dimensional boundaries caused by the Corruption of the Pillars -or occasionally through summoning spells. They were encountered by Raziel and Kain in the Blood Omen era in the final stages of Legacy of Kain: Defiance.

Fire Demons were a red-skinned horned demon variant with an elemental affinity for fire who were encountered in Legacy of Kain: Defiance after the appearance of several similar predecessors in previous games.[Defiance][Blood Omen][Soul Reaver 2] They were among the largest and most powerful of the enemies encountered in the game and could attack both physically with claw swipes and a number of fire-related attacks.[Defiance][Defiance/10][Defiance/12][Defiance/13][Defiance strategy guide]

Fire demons were powerful enemies at all ranges, employing a range of attacks that could easily cause major damage: including powerful lunge and charge attacks at close-range, fire-breath at medium range and fast moving fireballs at longer ranges. Fire demons were slow however, and could be easily sidestepped and outflanked. Like other demons, they could follow Raziel into the Spectral Realm and could also create Combat barriers to prevent escape.[Defiance][Defiance/10][Defiance/12][Defiance/13][Defiance strategy guide]

Although similar Fire-affiliated Demons had been seen in previous titles,[Blood Omen][Soul Reaver 2] the Fire Demons in Defiance were first encountered by Raziel in the chapter Seek Mortanius as Raziel explored the Avernus Cathedral and catacombs beneath in the Blood Omen era, where he discovered the Cenobites of the Hash'ak'gik cult could summon them from the Demon Realm using an ability described a "Nether Rift" - forcing Raziel to fight them before he could proceed further. They later attacked Raziel independently as he returned to the Vampire Citadel in Battle Kain and also confronted Kain as he escaped the Demon Realm and Avernus Catacombs in Return to the Guardian Citadel.[Defiance][Defiance/10][Defiance/12][Defiance/13][Defiance strategy guide]

Like other Demons the Fire Demons were natives of the Demon Realm but could be encountered in either the Spectral or Material Realms as the breakdown of the Binding and the Corruption of the Pillars weakened dimensional boundaries, allowing them to cross over.[Defiance][Defiance/10][Defiance/12][Defiance/13][Defiance strategy guide]

Description: This variant of abyssal demon seemingly has been spawned from the fiery inferno of some black and hopeless dimension. Preferring a close range, this demon spawn will rush up and wield its thunderous strength against its targeted prey. Once at close range, the demon's options of attack are many in number and all brutal.

Special Attacks:
•Breath of the Inferno: Opening its massive fanged maw, the Demon can unleash a torrent of blazing fire before it. This is a close- to medium-range attack designed for area of effect. Seeing the windup for this attack, the victim could evade this by quickly dodging around behind the occupied Demon to safety.

Strategy: Ultimately if these come from a Summoner, you should try to kill the caster before he can summon them. Your hits do not interrupt the demon's assault, so use a dodge-and-counterattack strategy. You should not engage the demon until it attacks, while dodging in the appropriate direction (such as behind it). Once you get an opening, beat on it until you have to back off, because of another approaching attack. Take your time and they will fall soon enough.
―Legacy of Kain: Defiance: Prima's Official Strategy Guide[Defiance strategy guide]

Fire demon in the Avernus Catacombs

A Fire demon in the Vampire Citadel

A Fire demon in the Demon Realm 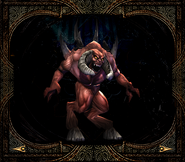