The Fire Glyph altar was an optional location in Legacy of Kain: Soul Reaver. It was one of several glyph altars Raziel could access in Nosgoth in the Soul Reaver era.

The altar was accessed by swimming through a flooded tunnel in the Razielim Territory and contained a distinctive stone statue resembling a demon. Activation of the altar allowed Raziel to gain the Fire Glyph.

The Fire Glyph like other glyphs in Legacy of Kain: Soul Reaver was an entirely optional enhancement and it was not necessary to visit the altar as part of the story of the game. The Fire Glyph altar was the one of a series of altars that could be reached from the middle of the game and could be accessed as soon as Raziel had devoured Rahab's soul and obtained the Swimming ability.[Soul Reaver][Soul Reaver/11][Soul Reaver/Fire]

The altar was found in the flooded section of Raziel's Clan Territory which led down towards the Drowned Abbey and was accessible from a high underwater passage to the east of the first flooded room which was only accessible by swimming. Swimming through the twisting passages, Raziel could surface into a wider circular chamber with several connecting rooms that ultimately led to a room with a distinctive statue - The Fire Glyph altar.[Soul Reaver][Soul Reaver/Fire]

To obtain the glyph it was necessary for Raziel to light the brazier on the statue, but to do this required some extra steps. First he had to open the gate to the altar so he could pass through in the Material Realm: he achieved this by progressing through the rooms to the west, using the time-freezing properties of the Spectral Realm to pass through a quickly shutting door and emerged in the chambers leading to the altar where he able to open the gate using a crank lever. Next he needed to ignite a fire source and bring it to the altar: this was achieved by progressing through the chambers to the east to gain a torch - which he could throw up to a high platform - and using the morphing properties of the spectral realm to jump up a series of pillars to reach a high room with a large Fire blazing. From there he could ignite the torch - or the Fire Reaver - and return to the altar.[Soul Reaver][Soul Reaver/Fire]

Once Raziel had lit the brazier the statue would animate, dipping its claws into the flames and extending its arms to cause a shockwave which sent a fiery blast back towards the rest of the altar area and lit all the braziers there. The ensuing blaze spawned the Fire Glyph between the now outstretched arms of the statue, where Raziel could claim it.[Soul Reaver][Soul Reaver/Fire]

The main chamber of the Fire Glyph area was a large circular room which served as a hub of the area. A circular pool at the center contained the underwater tunnel leading back to Raziel's clan territory. Around the outside of the pool were several stone slabs with the symbols of Fire Glyph and two murals of vampire figures. Three doorways were positioned around the outside of the room: the doorways leading to the east and west led to areas containing parts of the puzzle, while the doorway to the south - which was blocked by a gate - led to the altar area of the forge.[Soul Reaver][Soul Reaver/Fire]

The western doorway led to a long corridor which curved to the south before crossing another doorway and emerging onto a high platform above a circular room with eight pillars arranged around an empty bowl in the center. In the Spectral Realm the pillars would change into a graduated step arrangement, allowing Raziel to climb up to reach another high platform directly across from the entrance. Here a short narrow corridor led through into a darkened room with a large clawed brazier with a blazing fire in front of a large mural of a vampire figure and some unclear writing.[Soul Reaver][Soul Reaver/Fire]

The eastern doorway led through a similar but narrower curving corridor which also turned south and emerged in a large V-shaped room with a domed ceiling. A crank lever was positioned at the narrow end and at the wide end were a series of steps leading up to a large sliding double door decorated with a pair of demonic faces - with the same design flanking the entrance archway. With the crank activated sliding door closing to fast for Raziel to reach it was necessary for Raziel to shift to spectral and freeze time to reach the doorway in time and progress to the next area.[Soul Reaver][Soul Reaver/Fire]

Following the small corridor dropped Raziel into a small circular room behind the southern gate of the main area. The room had six plinths positioned around the walls alongside a number of decorative patterns and false doorways. The four 'corner' plinths each contained an extinguished claw brazier, while the eastern plinth held a crank lever which opened the northern gateway back to the main area. A small corridor to the south led into the main altar area: a room with a domed ceiling and a number of supporting pillars dominated by a multi-armed statue of an apparently demonic figure holding a bowl labelled only as "babar".[Soul Reaver][Soul Reaver/Fire]

In order to obtain the Fire Glyph it was necessary for Raziel to ignite the basket held by the statue. This was achieved by opening the southern gate and then returning to the eastern area to light either a torch or the Fire Reaver from the flame there and bringing it back to light the main altar. Once ignited, the demon statue awoke and blazed fire throughout the Fire Glyph sanctuary, igniting all fire holders in the area and spawning the Fire Glyph.[Soul Reaver][Soul Reaver/Fire][Soul Reaver strategy guide (Prima)]

One of the most distinctive features of the Fire Glyph altar area was the unique statue at the main altar. The character represented is unknown but its four armed and spiked appearance was evocative of various Wraith smiths of the Blood Omen: Legacy of Kain Spirit forges or the Fire-orientated Demons - and particularly resembled the Giant demons from Blood Omen: Legacy of Kain. Upon completion of the forge the statue was briefly animated and breathed fire to ignite several braziers and spawn the glyph icon. The statue was counted as a separate object to the surrounding level thus bore its own label: "babar".[Soul Reaver][Soul Reaver/Fire]

The Fire glyph altar is present in the Soul Reaver alphas but appears much plainer than its beta and retail counterparts. It features only standard brickwork textures, has no lighting effects and no mechanisms present. The "babar" statue is only found in the latest alpha and it cannot be interacted with. No murals or decorative features are present at the time and the mural figure in front of the flaming brazier is revealed by the alphas to have been a texture taken from and originally meant to have featured in the Undercity - this particular mural would later be used again in the Dark forge of Soul Reaver 2.[1][2][3][Soul Reaver 2][Soul Reaver 2/3]

The Fire Glyph area is displayed in the Debug menus of the May beta version under a section labelled as "Dark Eden", apparently relating to the location seen in Blood Omen: Legacy of Kain. However the position of Dark Eden in relation to the Legacy of Kain: Soul Reaver map areas is inconsistent with the known positioning of the Fire Glyph altar: The Blood Omen position of Dark Eden would place it further north than the Oracle's Cave or the the Ruined City of the Dumahim - while throughout the developmental builds the Fire Glyph altar remained in its final position in Raziel's Clan Territory in the mid-west of the map area. The label only appears in one early beta version - despite the altar rooms being present since the alpha versions - and ultimately the purpose or intended implications of the "Dark Eden" label are currently unknown.[4][Soul Reaver][Soul Reaver/Fire][Blood Omen][Blood Omen/7][1][2][3]

Raziel standing in the main chamber of the Fire Glyph shrine

Raziel standing in the main chamber of the Fire Glyph shrine

The outer chamber leading to the altar

The altar room and 'babar' statue

The altar room and 'babar' statue

The statue emits fire during activation

The main chamber of the Fire Glyph altar 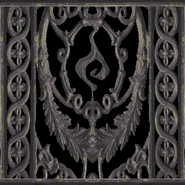 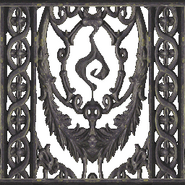 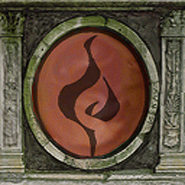 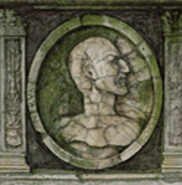 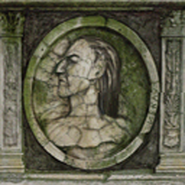 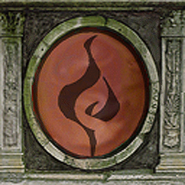 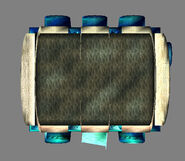 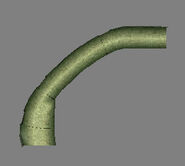