Feral Human Females, also listed as Feral Humans (Female) were a human enemy class in Legacy of Kain: Defiance. The females of an isolated tribe of Feral humans that lived in the ruins of the Vampire Citadel in Nosgoth's early history, they were encountered by Kain in the chapters Explore the Citadel and Open the Spirit Forge Chamber of Defiance.

Feral human females were a class of enemies encountered in Legacy of Kain: Defiance. As their name suggests, they were the females of the Feral humans tribe residing in the Vampire Citadel in Nosgoth's early history. As with the males of the tribe the females were first encountered in the chapter Explore the Citadel as Kain uncovered and investigated the Vampire Citadel in Nosgoth's early history. The class were seen again as Kain explored the Citadel further in Open the Spirit Forge Chamber but made no further appearances after.[Defiance][Defiance/7][Defiance/9][Defiance strategy guide]

The female version of the feral humans was dressed in a simple golden armor and a tunic around their waist. Just like their male counterparts, they had a set of blades attached to their arms and boots. Their mask was purple and red with a mouth piece attached to it. They also had a feathery looking decoration on their backs to resemble the Ancients. Unlike the males, however, they had only feathers, no bones inserted into their "wings".[Defiance][Defiance/7][Defiance/9][Defiance strategy guide]

As with other Feral humans they could be found in an alert and active state but were more often encountered hiding disguised as pile of feathers that came to life as Kain progressed. Their fighting style was quick and agile including several leaping and jumping attacks and notably included a thrown projectile.[Defiance][Defiance/7][Defiance/9][Defiance strategy guide] 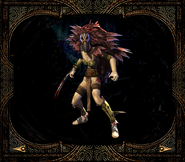 Retrieved from "https://legacyofkain.fandom.com/wiki/Feral_humans_(female)?oldid=188371"
Community content is available under CC-BY-SA unless otherwise noted.