Falchions were first encountered by Raziel as he arrived in the Sarafan Stronghold in the Pre-Blood Omen era and met the first Vampire hunter swordsmen enemy variants (of Moebius's Vampire Hunters) who would be armed with the broad Falchions as weapons. As Raziel traveled into the Era following Blood Omen he would again encounter these swords, this time held by the Demon hunter swordsmen of the Demon hunter faction.[Soul Reaver 2][Soul Reaver 2 strategy guide (Prima)]. 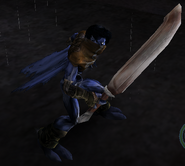 Retrieved from "https://legacyofkain.fandom.com/wiki/Falchions?oldid=188699"
Community content is available under CC-BY-SA unless otherwise noted.