Legacy of Kain Wiki
Register
Don't have an account?
Sign In
Advertisement
in: Blood Omen 2, Browse, Locations,
and 3 more
English

The Device was an ancient Hylden weapon encountered by Kain in Into the Depths of Blood Omen 2.

The Device was designed and built in the time of the war between the Ancient vampires and the Hylden, to wipe out all non-Hylden life in Nosgoth.[1][2][3] This would be achieved by 'attuning it' to all non-Hylden life and channeling the mental energy of the Mass - a living creature with fantastic mental powers, apparently fed by the blood of the Ancients - onto a conduit that would spread the power over the land. This conduit was never completed as the ancient vampires banished the Hylden to the Demon Realm before it was finished, with 'the Builder' of the Device ending up in Eternal Prison.[4]

Eons later, Raziel as the Hylden messiah, would unintentionally allow the Hylden Lord to possess and take the body of Janos Audron[Defiance]. This enabled the Hylden Lord to open the Hylden Gate and the Hylden to once again gain a foothold in Nosgoth. The Hylden Lord revived the Sarafan, defeated the young Kain's growing empire and manipulated the Humans to take over Nosgoth. During this time, The Device was secretly uncovered and Janos imprisoned within to feed the Mass, as the Hylden - disguised as glyph wrights - completed an maintained a glyph magic network that would provide heat, light and to a certain degree protection from vampires (in a similar manner to electricity) to the human population. This network however could also be used as a conduit for the Device.[4][5]

By the time Kain had returned in his quest for vengeance against the Sarafan Lord, the network was virtually complete. After he defeated Sebastian, Sebastian gloated that Kain's death was inevitable and that the Device would rain destruction upon Nosgoth.[6] On Vorador's advice, Kain traveled to the Canyons to find out more information from the Seer,[1] who also viewed the Device in similar fashion to Sebastian,[2] but eventually gave Kain the Dark Gift 'Telekinesis' [7] and Teleported him to The Device.[8]

Upon entering Kain conversed with a deformed Beast that lay within, apparently being drained to power the Device, who told Kain the whereabouts of the Eternal Prison and that the Builder would likely help him destroy the device after his centuries of imprisonment.[3] The Builder was only to happy to help and offered Kain the solution to destroy the Device, to poison the Mass with Hylden blood.[4] Kain returned to the Device, and descended into the machinery.[9] Fighting off many Hylden and Hylden warriors to reach the Mass, where he was able to poison the Mass and render the Device useless.[10] By the time he reached the highest levels of the Device once again, the Beast had regained his true form - that of Janos Audron - and after explaining some of the background to the Device and the Hylden,[5] Janos teleported them both to Sanctuary.

The Device viewed from The Upper City

The Device section after the Canyons level

The Device unmasked, viewed from above

The Device unmasked, viewed from below

The Mass - The creature at the heart of The Device 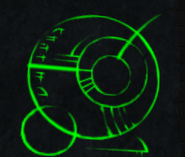 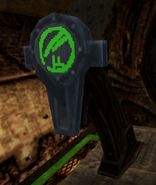 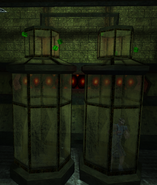