Legacy of Kain Wiki
Register
Don't have an account?
Sign In
Advertisement
in: Blood Omen, Browse, Locations,
and 10 more

Locations article
Dark Eden from afar, as it appears in Blood Omen: Legacy of Kain.

"If it could be said that a land descended into madness, ‘twould be an accurate account of Dark Eden. A garden of horrors, seeded with sick perversion of nature’s design.
I knew that this Dark Eden I had trespassed upon would continue to grow, until all of Nosgoth was consumed."
―Kain — Listen (file info)[src]

Dark Eden was an unnatural landmark in the far north of Nosgoth, witnessed during the events of Blood Omen. Fashioned by the corrupt Guardians Anarcrothe, Bane and DeJoule, it was a warped land, characterized by abominable creatures with green Blood, abundant lava, and a dome of corrosive energy which stemmed from its central tower. Kain visited the region in Blood Omen: Legacy of Kain.

Kain first spotted Dark Eden by the monstrous dome of energy rising from its tower, shortly after he left Vorador's Mansion . He was able to enter the area either by using Bat Form or continuing up the trail North past Uschtenheim .

The path was filled with the grotesque creatures crafted by the madness of the corrupt Guardians DeJoule, Bane, and Anarcrothe. The creatures range from: Fat monsters viscous that move like slugs, crawling on the ground, creatures shoot a poisonous projectile. Plants that release a poisonous toxin. Humanoid creatures, which shoot bumps from his body, in all directions.

A magical barrier surrounded all of Dark Eden, twisting anything alive inside into mutated monsters, curiously though, it did not effect Kain, who was supposedly "twisted enough". Kain was eventually able to enter the Tower at the heart of Dark Eden, which was bigger inside than out. He was able to gain the Flesh Armor and the Spirit Death spell before he was able to confront the three guardians. Upon seeing Kain, Anarcrothe summoned Malek and fled, to counter this Kain used the signet ring to summon Vorador and chased Bane and Dejoule to a battle outside. After defeating the Sorcerers he returned to find the remains of Malek.

A nearby Moon Gate led to the Lightning Spell.

Dark Eden was referenced in the backstory to Nosgoth and the Scout class, where it was stated that after the fall of the Major human kingdoms and the rise of Kain's empire in the events of Soul Reaver, Dark Eden became a designated hunting ground for fledgling vampires. The humans born and raised in Dark Eden became "cold hearted", "shrewd and opportunistic", setting up the faction known as the Watchers which was imitated in other corners of the land. It was the Watchers who first spotted the pursuit of Sarakiel and the evolved Razielim over the skies of Dark Eden, which signalled the start of the Vampire civil war and they duly sent word to the other humans, kicking off the human revival.

The area was also mentioned in the background to the Beastmaster class, which noted the environmental damage and twisted life birthed by Dark Eden, implying the corruption of life birthed by the triad had seeped into the land and subtly effected those who dwelt there long after the abominations of nature had disappeared. The 'scourge of the wild' faction gained their powers from the mutations caused by living in the area and came to revere Bane and DeJoule and the corruption of nature they unleashed as holy, ultimately attempting to emulate their environmental dominance and destruction.[1]

Dark Eden's magical barrier was noted by Kain to be expanding and would have likely consumed all of Nosgoth had Kain not destroyed the circles sorcery. Given their visual similarity, it is possible that the potential future seen from the eye sockets of Nupraptor's Retreat was due to the expansion of Dark Eden.

On his way to the tower, Kain passes the ruins of a human settlement, these ruins are never named and have never reappeared in any other games.

Dark Eden has a significant amount of magma and lava, particularly around the tower. Due to the appearance of Magma around the Smokestack in pictures released from the Original Soul Reaver Storyline, it was initially assumed that Turel's Clan Territory was sited in Dark Eden, maps of the locations in Legacy of Kain: Soul Reaver disprove this however.

The Contents of the tower (particularly the chemicals and laboratory equipment)seem to indicate that Dark Eden is Anarcrothe's fortress. If so he would become the second guardian in a row that whose territory Kain had visited and who had escaped. It is unknown where Bane and Dejoule's strongholds were. 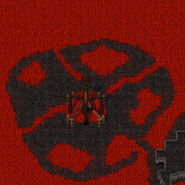 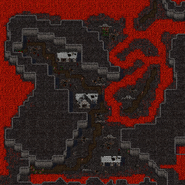