Legacy of Kain Wiki
Register
Don't have an account?
Sign In
Advertisement
in: Blood Omen, Browse, Locations,
and 3 more
English

Locations article
Coorhagen as it appears in Blood Omen: Legacy of Kain.

"Coorhagen, my home, the finest city in all of Nosgoth, rich in vanity and conceit. I had no delusions as to the welcome I would receive."
―Kain — Listen (file info)[src]

Coorhagen was a major human settlement that was visited by Kain in the course of Blood Omen: Legacy of Kain. The town was located north of Vasserbünde and north east of Malek's Bastion. Kain passed through the settlement on his way to Malek's Bastion in the chapter The Hunt for Malek. It was notably Kain's hometown before his murder.

Coorhagen was the city of Kain's human birth, it was situated north of Vasserbünde and was visited by Kain in Blood Omen: Legacy of Kain. Kain was to return to Coorhagen during Blood Omen on the way to Malek's Bastion, by the time he returned to Coorhagen he found the city had been overrun by the Plague, which had ravaged the city, leaving carts full of bodies littering the streets and blocking many of the paths through the city, consequently Kain had to use a maze of underground chambers and dungeons to progress. Underground Kain could find the Repel Dungeon and the Bone Armor Dungeon - and he could optionally discover the Inspire Hate Dungeon. He also found his first Pentalich of Tarot and Anti-Toxin artifacts.

Nosgoth materials suggested that the town continued to exist into the events of Soul Reaver and that in the early years of Kain's empire, the town was controlled by the Vampires and was home to a number of human blood-farms and breeding-pens, beneath a colossus in the form of Kain himself. As such a strategic target, the town was among the first areas attacked by humans in the War for Nosgoth.

Coorhagen is one of Nosgoth's largest cities at the time of Blood Omen, with 52 discrete buildings, however few can be entered and most that are accessible are linked to the underground dungeons found in the area.

The version of Coorhagen seen in the alpha versions of Blood Omen: Legacy of Kain externally appears to be quite similar to its retail counterpart, with some minor changes to house design, signage and the enemies encountered. There are however a number of more significant changes around the town and in its underground dungeons:

"Years ago, word reached us of a strange pestilence that had laid siege to a few remote villages far east. But the rumors failed to prepare us for the horror that was the Plague."
―Kain — Listen (file info)[src]

Kain comments on the plague that seized Coorhagen as he entered, noting that it had ravaged a few remote villages far east. It is not known which villages these were and no other Nosgothic settlement seen so far exhibits any sign of the plague. Some fans have speculated that there is a link between The Plague seen in Coorhagen and the creatures seen in Dark Eden; as the ruined settlements on the path to Dark Eden are possible candidates for former 'Plague Villages'.

It is likely that Kain's presence in Ziegsturhl at the start of Blood Omen was because he was fleeing the plague that had seized Coorhagen. The Plague also made Kain's visit to his next target, Malek's Bastion, that bit more difficult, as Kain could not feed on tainted blood in Coorhagen, or the magical Blood in the Bastion.

As Kain himself notes, Coorhagen was loyal to Willendorf and many tapestries had Ottmar's Lion sigil on them.

Coorhagen has some interesting floor murals; as well as many which appear to represent death and there is a prominent 'grim reaper' mural. Along with this, there is a mural of the Iron Sword, which given the nature of 'power-up' related murals in Blood Omen may suggest that the Iron Sword was meant to be collected by Kain in Coorhagen; this may also imply that in early versions, Kain was meant to start the game here. None of these theories is supported in currently known builds.

Coorhagen is one of the few areas where the ghost enemies can be discovered. In the final game the class is exceeding rare and is only found in the basements outside the Inspire Hate Dungeon, but prototype builds reveal that the class was originally intended to be more widespread with them notably found in the graveyards surrounding the early version of the Energy Bolt Dungeon. 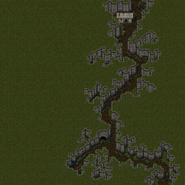 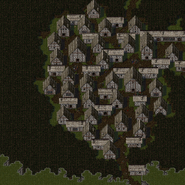 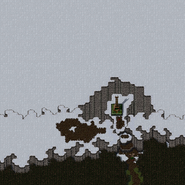 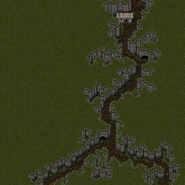 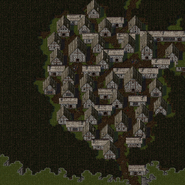 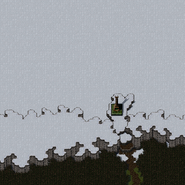