Cenobite Acolytes were an enemy class encountered in Legacy of Kain: Defiance. Part of the sect of Cenobites, they were human servants of Azimuth - Guardian of Dimension and matriarch of Avernus. Acolytes were the junior ranks of the Cenobite faction and were chiefly encountered by Raziel as he explored Avernus Cathedral in the Blood Omen era in the chapter Seek Mortanius.

Cenobite Acolytes were basic enemies of the Cenobites enemy faction that were featured in Legacy of Kain: Defiance. The faction was an important political grouping within the administration of the city of Avernus and existed in the Blood Omen era. Despite appearances, the class also had a dark side and were heavily involved in the worship of the dark god Hash'ak'gik and were known to kidnap travellers for sacrificial purposes.[Defiance][Defiance strategy guide]

Like their summoner brethren, the Cenobite acolytes dressed in a creme-white robes with gold trim and maroon-red band around the bottom. A pair of patterned gold sashes were worn from the shoulders forming an golden 'X' pattern over the chest - and gold bands were also worn around the wrist. The class wore a golden 'greek-style' tragedy mask on their faces, but balding heads with horseshoe shaped thinning hair could be seen behind the masks. Primarily the class attacked with simple strikes and by summoning plumes of fire.[Defiance][Defiance/10][Defiance strategy guide]

The class were first encountered in Defiance by Raziel as he explored Avernus Cathedral in the Blood Omen era in the chapter Seek Mortanius, with a group attacking as Raziel returned from the Earth forge. The Cenobites continued to attack as Raziel made his way through the Avernus Catacombs - although the acolytes were gradually replaced with the more senior Cenobite summoners who could summon Demons along with a host of other advanced spells. The Cenobites could be encountered throughout Seek Mortanius and could again be fought in Return to the Guardian Citadel as Kain escaped Avernus.[Defiance][Defiance/10][Defiance/13][Defiance strategy guide]

In the cancelled game Nosgoth one of the playable classes - the Prophets of the Lost seers of Avernus - were descended from the Cenobites of Avernus in the Blood Omen era who had defied Azimuth and escaped the city of Avernus, taking their secrets with them and over time reorganizing into a blood based divinatory order by the time of the Soul Reaver era.[1][NOS]

A Cenobite Acolyte in game 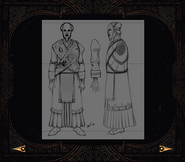 Cenobites concepts in Bonus materials
Add an image to this gallery

Retrieved from "https://legacyofkain.fandom.com/wiki/Cenobite_acolytes?oldid=189282"
Community content is available under CC-BY-SA unless otherwise noted.