The Canyons is a playable location featured in Blood Omen 2, it is just outside of Meridian and is featured in Wild Places.

Vorador sent Kain to the Canyons in a bid to meet the Seer and uncover her knowledge of the Device in Chapter 7 . The Canyons were a set of deep valleys leading "north"[1] out of Meridian, as the title of the associated chapter suggests, they were considered a wilderness.[2] The Canyons were mainly used by the travelling merchant NPCs (who presumably brought supplies to or from Meridian), during their travels they were frequently under threat from Smugglers (who apparently raided carts and stole supplies)

Kain found that a major bridge traversing the canyons had fallen[3] (though whether this is due to Smugglers,Lesser Demons or natural causes is not elaborated upon) this meant Kain had follow the traders carts around the outside of the Canyons passing through several Sarafan gatehouses, unstable cavernous areas and through a Smuggler's Warehouse, eventually emerging in a demon infested area littered with corpses of merchants and Sarafan troops.

Following a set of tracks to an unnamed industrial settlement, Kain found it barricaded but littered with corpses. Beyond the settlement he found several Sarafan buildings before finally finding the Seer's Cottage, gaining from her the Dark Gift Telekinesis and being teleported to the Device[Blood Omen 2].

The Canyons Settlement in a conjectural term for the unnamed industrial settlement featured in Blood Omen 2, in Chapter 7: The Canyons.

Kain first came across the settlement while exploring the Canyons, searching for the Seer's Cottage. On the outskirts of the settlement there was a large Sarafan symbol carved into the rock-face and a gatehouse that was on fire, allowing Kain's entry. Inside Kain found a single Lesser Demon, a large windmill and a track and locomotive which Kain was able to activate and use to travel, through a tunnel to the main settlement[Blood Omen 2].

The main settlement was a large walled hamlet whose doors were barricaded, (presumably against Lesser Demon attack, although this seemed to have been ineffective as many Industrial workers corpses were found inside.), it also contained many industrial elements including two cranes, a conveyor belt and refinery, several carts and the same track and locomotive system Kain had used to travel there. The settlement also had several Glyph magic applications including a Glyph battery. Kain used the cranes to drop a large rock on a Glyph battery causing it to explode, destroying one of the walls and allowing Kain to escape the main settlement[Blood Omen 2].

Following the tracks out of the main settlement, Kain found a set of Sarafan-banner decorated buildings, under heavy attack from Lesser Demons, who were easily overpowering the defending Sarafan Knights and Workers . These buildings appeared to be a "power station"[4] (which fuelled the nearby Ward gates) and a fenced off 'barracks'. Deactivating the ward gates, Kain was able to travel down the trail to the Seer's Cottage[Blood Omen 2].

barricaded doors to the settlement

Minecart tracks from settlement into nearby mine

The Seer's Cottage, also known as the Seer's Abode[2][5]., or the Abode of the Witch [3] was a building featured in Blood Omen 2, in Chapter 7:The Canyons. It was the home of the Seer and the location of Kain's meeting with her.[6]

The Seer's Cottage was first seen when Kain traveled to the Canyons in Chapter 7: Wild Places. Seeking the Seer's knowledge of the Device, Vorador had sent Kain to her cottage in the north of the Canyons.[5] Kain eventually found the cottage perched on the edge of a cliff, nearby the unnamed industrial settlement and the associated Sarafan buildings.[3][Blood Omen 2] The Cottage was a modest brick building with a wide wooden chimney and a wooden porch with a rocking chair on it. Next to the cottage, there was a small brick enclosure which housed a small waterwheel that ran from a nearby waterfall (which flowed over the cliff) and a wood store. Nearby the cottage there was also a well and a windmill. Inside, the cottage contained several 'homely' elements including a quilted bed, a small boiler, a fireplace, a ladder, a chest of drawers and table and chairs.[Blood Omen 2][7]

Entering the Cottage, Kain met the Seer and was able to persuade the Seer that he was capable of destroying the Device. Whilst the Cottage was under attack from the Sarafan Lord and a set of (fire arrow shooting) Sarafan Archers,[8] the Seer ordered Kain to drink her Blood, enabling him to gain the Dark Gift Telekinesis.[9] She also teleported him to the Device, saving him from the Sarafan Lord, but did not join him.[10] It is likely the Cottage burnt to the ground in the attack, but the fate of the Seer herself is a mystery.

Wide Shot of The Seer's Cottage

Inside The Seer's Cottage 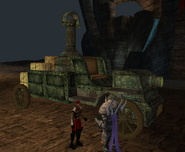 Gates to the Fallen Bridge

Outside the Smuggler's Warehouse

Other end of Fallen Bridge and Sarafan Order 'Power Station' 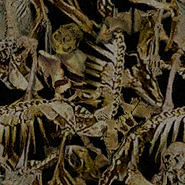